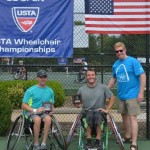 Nick Burnham and Larry Keeter have a lot in common.

They share a south Charlotte apartment, but they also are tennis partners who travel together to compete in tournaments across the country.

They play in a wheelchair league because they also both are incomplete paraplegics, having sustained injuries that left them with spinal-cord injuries that changed their lives.

Incomplete paralysis means the spinal cord has been partially damaged; some motor and sensory function remains. The amount of damage varies by individual: some may have feeling but little or no movement, or they may have movement but little or no feeling.

For Burnham, 33, who moved to North Carolina in 2004 for a construction job, his injuries were the result of a 2008 workplace accident that led to incomplete paralysis of his lower extremities. A log rolled off a dump truck onto him.

“I went from feeling like superman to being unable to do anything,” he said.

Keeter, 26, was injured in 2006, on senior day at his high school in Fort Mill, S.C., when he fell more than 20 feet from a climbing tower. He was two weeks shy of graduating and had a wrestling scholarship to Limestone College.

“It’s not just that you can’t walk anymore,” Keeter said. “That’s just the physical side of it, but the emotional side is so much worse.”

Both men, who didn’t know each other at the time, went through what they describe as very dark periods.

“I was broken,” said Keeter. “I started doing things I shouldn’t do to numb the pain. I became a person I didn’t want to be.”

Burnham, too, needed a change. “I finally forced myself to get out and start doing stuff,” he said, and became involved with the Adaptive Sports & Adventures Program run by Carolinas Rehabilitation Services, pursuing sports that had seemed off-limits before.

“For the first time,” said Burnham, “I realized I could have an active lifestyle.”

Burnham met Keeter at an ASAP water-skiing event in 2011. Burnham had also begun playing tennis and was looking for a partner.

“I thought it would be good for him to get out,” Burnham said, recognizing in Keeter the same pain-numbing ploys he had used during his own dark days. “But I also needed someone to play with.”

Both had played only recreational tennis before their injuries. Learning to play while in a wheelchair, where the only concession to their confinement is that the ball can bounce twice rather than once before being hit, was mentally and physically taxing.

Keeter initially resisted Burnham’s prodding to play in a tournament.

“I knew from his wrestling background that he had a competitive fire in him,” Burnham said. “I just had to get him to one tournament, and then he’d be hooked.”

He was right. Burnham and Keeter now travel the country and play in the wheelchair-tennis division of tournaments an average of twice a month, steadily moving up and becoming more competitive.

They now compete in the open division, the highest level.

Both are passionate about giving others what tennis gave them. To that end, they have started a wheelchair tennis league, CarolinaRollinRackets, in partnership with the Rock Hill Tennis Center.

The two have hosted two wheelchair tennis clinics and have a core group of about a dozen players who attend clinics every Friday.

They hope to raise awareness of wheelchair tennis and recruit recreational and competitive players for tournaments.

They are particularly eager to reach children. “I want to teach them that you are still strong and you can do this,” said Burnham.

“I want to be able to offer that to others.”

For information about the wheelchair tennis league Nick Burnham and Larry Keeter initiated or to make a donation, visit https://www.facebook.com/CarolinaRollinRackets.