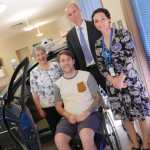 The loss of hand function is one of the most devastating consequences of Spinal Cord Injury (SCI) because of its severe impact on the everyday activities of daily living. Melbourne University Researcher Professor Mary Galea and Ms Natasha van Zyl, one of three specialist surgeons in the Upper Limb Program at Austin Health, supported by the Institute for Safety, Compensation and Recovery Research (ISCRR), are carrying out pioneering research in support of nerve transfer surgery for SCI patients in Victoria. The surgery involves plugging surplus live nerves into nerves that no longer work to reactivate muscles and restore movement in patients’ hands. One of the patients going through the surgery is Joel Sardi.

Breakfast time is just ending at the Austin Health’s Royal Talbot Rehabilitation Centre. Joel Sardi, a 24 year old Melbournian is readying himself for his first physiotherapy session for the day – a competitive game of wheel chair tennis, using sport and recreation to assist rehab.

He had an accidental fall from a height down stairs seven months ago (August 2014) and this caused a severe injury to his spinal cord. He was an active infantryman in the army at the time and living in Adelaide. He was very independent and was thinking of buying a house and, yet at 24 years old, Joel became a tetraplegic.

Joel said, ‘Playing sport growing up I have had injuries before, many that needed hospital treatment. I was always able to get through them and bounce back. However, this time it was different. The quick fix was not a solution and it took me a while to accept that that was not going to be the case this time.

‘It is a cliché – though I am a young twenty something male and totally fit the profile for the group of patients who have an SCI – I still thought ‘never me’. I still think often about the situation I am in and think I must be dreaming…this couldn’t have happened to me…but it did.’

Joel’s mum Tracey Sardi reacted to what happened very like her son, ‘to deal with it l assumed as before he was young and he would bounce back like he always did. When I went to Royal Adelaide Hospital and the reality tried to sneak in I pushed it to the back of mind and repeated again he will be alright. Eventually we faced it together… we knew as a family that as tough as it would be it could have been much worse. Joel is a great person and we are so lucky to have him in our lives.’

Joel agreed, ‘my family have been an amazing support to me and I know that this is a huge positive in my life. My family, my girlfriend and my circle of friends…all have come forward to help and be there for me through this…involving your extended family and accepting their support….it’s something you just need to do.’

After his accident Joel was transferred from the Royal Adelaide Hospital via Austin to the Royal Talbot Rehabilitation Centre. He speaks highly of the Centre and its approach to rehabilitation, ‘This Unit is amazing. I expected the technology and equipment but was surprised by other things I knew nothing about which have made such a big difference for me. Occupational Therapy for example, I have learned that the smallest change like changing the angle of a fork or a mattress or adding some Velcro to your phone will make the biggest difference to me day to day.’

‘I have had to learn so much more about my body,’ he said, ‘being sporty and needing to know first aid as part of my army training…I thought I knew how my body worked. Since my injury I have to re-educate myself about how my body works. I have to use different flags to before to know when something is wrong or if I want to use a muscle. I am learning to be better and more aware of these flags.’

Joel first heard about Nerve Transfer Surgery about a month in from his arrival at Austin Health’s Royal Talbot Rehabilitation Centre, ‘I was told about a meeting and was asked if I wanted to go to find out information about the surgery and initially I was hesitant,’ he said.

The surgery has for many allowed more movement and therefore more independence. Being able to manipulate the thumb and fingers allows people living with tetraplegia to manage more daily tasks on their own.

‘There was a lot of information and the staff explained it to me and Natasha (the surgeon) has been great at answering my questions. So when push came to shove, despite my hesitancy, I decided it was worth it to see how my life could change, if I can have more power over my hands and movement in my fingers.

‘I know that the surgery on its own will not work unless I put in the effort after my surgery…there will be lots of exercises and therapy I need to do and I want to do it for my future. However, It [the surgery] could change everything — mentally, emotionally and physically, it could enhance my life so much,’ he said.

Joel had not been aware of the big role research played behind the scenes currently in Nerve Transfer Surgery, he said, ‘I was very impressed that a University Professor was interested in my case.’

Professor Mary Galea is a physiotherapist by profession and is a neuroscientist internationally recognised for her research. She is meeting Joel for the first time today and they both had plenty to talk about. Mary plays a key role in delivering the research around the surgery Joel will soon be having.

‘The loss of hand function is one of the most devastating consequences of spinal cord injury,’ Professor Mary Galea said, ‘The Victorian Spinal Cord Service at Austin Health is the first in Australia to offer nerve transfers to patients and one of a handful worldwide. We are trying to understand and gather information on patients who have the surgery – this will help inform us about the best time for surgery and the level of rehab required after for different types of patients. Joel’s surgery is part of that work.’

Standing to the side listening to Mary and Joel talk is Natasha van Zyl who is Joel’s surgeon. Natasha has seen how this surgery has made a difference to patients who are now well into their recovery – the best result being patients opening and closing their hand again, ‘You cannot underestimate the difference being able to open and close your hand can make. It is the everyday normal aspect of this movement which provides such motivation and growth of self-esteem in patients.’

She is realistic that this surgery is not a quick fix. It can take up to a year before patients have use of their thumb and index finger, ‘We use a nerve transfer to bypass the spinal cord injury, which blocks signals to the brain we then engineer a detour around the injury by connecting a nerve that still communicates with the brain.

‘The procedure Joel will have aims to restore elbow extension and grasp and release simultaneously using nerve transfers, functions which were unobtainable using standard tendon transfer techniques alone, and have the potential to greatly enhance independence and quality of life. It could give him more power and dexterity as a result. This is a long term journey we are on together. ‘

The goal of the surgery is to restore a patient’s ability to lift and hold small things, such as a straw, fork, spoon, toothbrush and pen without aids.

‘Patients such as Joel lead difficult lives; most need help with daily activities. Any measure that provides more movement will also lead to greater independence. I see patients being able to manage more tasks on their own and I know this research is truly changing lives. Joel has overcome so many hurdles to even get where he is,’ Natasha said, ‘It’s really opening everyone’s eyes up that you can do anything you set your mind to.’

‘I get strength from patients such as Joel, I find them so inspiring. Through this injury they have lost so much but yet that is overshadowed with so much hope and level of effort they put into everything they do – they are keeping it real for me.’

Joel was very sporty as a teenager and before his accident. He lived and breathed the army life as a young man with an active and healthy lifestyle. He was very independent at the time of his accident and was enjoying being based in Adelaide. This has not changed Joel; he remains a very independent person after the injury and his realistic and practical outlook on his recovery to date and in the future is inspiring.

When asked if there is one piece of advice he could give someone who has just had a traumatic injury to their spinal cord he said, ‘instead of looking three months ahead I would say look one day ahead. It does you no good looking too far ahead. This makes it harder for you to have an idea of what is possible for your own personal recovery. Take each day as it comes. Plan what you want to do that day and do it. When you look back at a few weeks that have gone you will see how much you have achieved by working hard a day at a time…it’s all about the small victories every day.’

Joel is due to have Nerve Transfer Surgery in April 2015.

Joel’s interview on AM with Michael Brissenden

Facebook
Twitter
Email
Mix
Digg
Previous articleGroundbreaking device being tested by VA may put end to pressure ulcers
Next articleCould Spinal Cord Repairs in Mice Lead to a Cure for Paralysis in Humans?