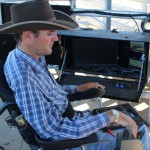 Renowned quadriplegic cattleman Rob Cook has moved 2,500 kilometres across the country to trial new cattle yard technology he says is changing his world.

The fourth-generation producer and Nuffield scholar moved from his family’s property Suplejack Downs Station in the Northern Territory, to Queensland’s Bundaberg region, 15 months ago.

He is testing new devices including a joystick that lets him operate cattle drafting gates from his wheelchair.

“It means the world, I mean, the cattle industry’s a very physically-driven industry and somebody who can’t move any part of their body, it’s a game-changer for me,” he said.

Cook’s inspirational journey began when he plummeted 60 metres to the ground in a helicopter crash during a muster on Suplejack Downs in 2008.

Crews raced to save him, but the damage was instant – he had dislocated his C4 vertebrae, and was paralysed.

Instead of conceding defeat, he decided to champion the use of technology to help injured farmers keep working, which earned him a Nuffield Scholarship in 2011.

Now, Cook and his family have bought three properties near Bundaberg to establish some new devices on a smaller-scale operation.

If successful, he said they could be transferred to his operation in the NT.

“Technology, it’s become a pretty broad word, and I guess innovation’s one that holds hands with technology.”

As well as drafting using the joystick, Cook is once again able to help with the cattle ultrasound work.

He has taught his wife Sarah to use a new ultrasound machine that is connected to a monitoring screen he can see while he is drafting.

Mrs Cook said the new system had brought her family closer, and made work more enjoyable.

“It’s easier for us all to be a part of the yard set-up… it’s pretty enjoyable now. It helps keep our stock calm as well.”

The family had also saved tens of thousands of dollars by importing steel cattle yard panels from China.

Mrs Cook is from Queensland’s Darling Downs, and said moving back to the Sunshine State was no shock to the system.

But for their sons, Lawson and Braxton, who are now attending school in a classroom and not through School of the Air, life has taken a big turn.

Lawson, 7, said it was very different, but had its upsides.

“It is kind of fun here, it is a far way from Suplejack, but closer to our granny’s house.”

Mr Cook said one of the biggest challenges had been learning to work on a smaller scale.

“We’ve got to make every blade of grass count with what we’re doing (in Queensland),” he said.

When it comes to the health of the cattle industry into the future, Mr Cook said the indicators were promising, but producers needed to keep up.

For example, to safeguard against drought, he has installed a fodder unit that produces 1.5 tonnes of barley fodder every day.

“It’s little things like this as far as technology goes; as it evolves, so long as the Australian cattle industry evolves with it, I think the future’s looking very bright.”

The Cooks are running a backgrounding block near Gin Gin, a house block at Bucca, and breeder block near Agnes Water.