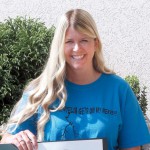 If you’ve never heard of syringomyelia, you aren’t alone, but a Maryville woman suffering from the spinal cord disorder hopes to change that as she continues on an awareness campaign.

Lisa Campbell has suffered from syringomyelia (SM) since a car wreck in 2006. It’s a disorder in which a cyst forms within the spinal cord. The cyst, called a syrinx, expands and elongates over time. As the tumor widens, it compresses and injures nerve fibers that carry information from the brain to the extremities.

Symptoms can include weakness in the arms and legs, stiffness of the back, headaches, loss of the ability to feel extreme heat or cold, loss of bladder and other functions. Campbell said each person is affected differently by this progressive disorder that has no known cure.

According to the National Institute of Neurological Disorders and Stroke, there are about 40,000 people in the U.S. who have syringomyelia. Symptoms generally begin in young adulthood.

“There are a lot of doctors even, who don’t know a lot about it,” Campbell said. “Mine was due to a car accident in 2006. Some people are born with it.”

The cyst disrupts the spinal fluid and creates a pocket, Campbell said. The pocket then keeps growing, causing more damage and in some cases, paralysis.

Recently, Campbell and the Wordwide Syringomyelia and Chiari Task Force submitted paperwork to the Tennessee Legislature, requesting that May be deemed Syringomyelia Awareness Month here in Tennessee. The proclamation was signed by Gov. Haslam, making it official. Sen. Doug Overbey was instrumental in getting the action passed. Campbell received a copy of the proclamation and also a flag that flew over the state capitol in honor of the designation.

A nurse who resides in Georgia, Beth Nguyen, has created the nonprofit Worldwide Syringomyelia and Chiari Task Force and has been working with victims of the disorder to get the word out. Nguyen fell ill with syringomyelia and hers developed to the point she is now on permanent oxygen.

She was misdiagnosed as having multiple sclerosis, Campbell said of Nguyen, a common mistake.

When Campbell was diagnosed, she was having numbness in various parts of her body and also pain. She said an MRI is the only way to make an accurate diagnosis.

There have been soldiers coming home from combat who experienced spinal cord trauma and are now being diagnosed with SM. Race car drivers and golfers have also experienced the painful disorder.

Day-to-day life is a challenge. Campbell said she can’t lift anything heavier than a milk jug. Sneezing hard or straining can also cause further damage to her spinal cord. This grandmother of two said it’s hard to have to say no when those little ones want to be lifted up.

“If I do something I shouldn’t, I will have to pay for it later,” she said.

Nguyen actually suffered from heart failure because of syringomyelia. Campbell said she didn’t take her diagnosis that serious at first, but she now knows better. The last three years have seen a decline in her condition.

The medications used to treat this disorder are the same ones given to victims of MS and also ALS. Those medications can cause fogginess and also weight gain.

On this particular day, Campbell said she was feeling OK. She was dealing with cramps down her leg. Sometimes it feels like a lightning bolt has gone off inside. She uses a walker to steady herself and to prevent falling.

“I have come to terms with it,” she said. “It’s been hard. I have always been an active person. I walk and do different things.”

There is always hope a cure can be found. In the meantime, Campbell and others are out there trying to educate the rest of us about this disorder that can leave its victims paralyzed or result in death.

There may be people out there who have it and don’t know it, Campbell said. It is so important to get diagnosed early since damage is irreversible and progressive.

By Melanie Tucker
The Daily Times