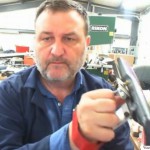 One of the reasons we love Reddit is that every so often it shows off humanity’s kinder side.

Rachelle Friedman aka Rollingonwheelz, is a quadriplegic woman who got a dose of this kindness after she posted a casual comment in response to an AMA question from the Reddit community about how she did her hair and make up.

Comment from discussion my best friend playfully pushed me into a pool at my bachelorette party and now IAMA quadriplegic known as “the paralyzed bride” and a new mom! AMA!.

Comment from discussion my best friend playfully pushed me into a pool at my bachelorette party and now IAMA quadriplegic known as “the paralyzed bride” and a new mom! AMA!.

Well a guy read her post, and created a modified hair straightener that will allow Rachelle to clamp the device using her wrist instead of her fingers.

He then posted a video on YouTube with instructions for Rachelle on how to use it.

The solution is the perfect alternative to using your fingers to open and close a hair straightener.

As it turns out the guy is well known on Reddit as I_Lase_You.

Rachelle says the hair straighteners will give ‘many women… in her situation more independence in feeling beautiful.’

It’s good to see some people using their powers for good. Faith in humanity restored.