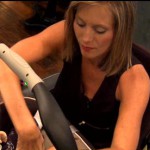 BENTON (KATV) – Finishing your second year of law school while single and pregnant certainly can’t be easy. Add on the fact you’re a quadriplegic confined to a wheelchair and it may seem impossible – but that’s exactly what Jen Goodwin is doing.

Seven years ago, Jen Goodwin was in a boat on Lake Hamilton when an accident on board resulted in C5 & C6 spinal cord injury, leaving her paralyzed from the neck down.

Since the accident, Goodwin has regained some motion on her arms. It allows her to live on her own in a home that was made accessible just for her. She’s never let her injury get in the way of her goals – especially the one of being a mom.

Goodwin said she’s been on dates, even had boyfriends following her accident and rehabilitation – but none wanted anything serious involving children.

Goodwin had looked into adoption and even surrogacy, but she said several adoption agencies were hesitant to place a child with her as a paralyzed woman. She eventually opted for artificial insemination and the pregnancy took.

“I talked to my obstetrician and she was super supportive from the very beginning and she just said, ‘You know Jen, why don’t you do this yourself? There’s nothing that says you can’t carry this baby, so let’s do this,’” recounted Goodwin.

What used to be an outdoor patio, will now be Goodwin’s baby nursery. The nursery will be completely handicapped accessible to allow Goodwin to change diapers and care for the baby at her own level.

“My bedroom is here and so I’ll have doors that open directly to his nursery so I’ll have really easy access,” said Goodwin, while showing off the construction.

The obvious question posed by many to Goodwin is how will she be able to handle caring for a child with limited mobility. Goodwin has always known it will be an uphill battle.

“Already going into this, I knew that with limited hand function it was going to be a challenge to manage a baby,” said Goodwin.

For the last seven months, Goodwin has been practicing with the physical therapy program at the University of Central Arkansas on preparing to hold and handle the baby. Goodwin bought a weighted baby to practice putting the child into a car seat and placing the car seat into her handicapped accessible vehicle.

Goodwin said that anytime a challenge present itself she says, “I’ll figure it out.” She said if her baby eventually requires a nanny – then that’s something she’ll have to do. It certainly helps that Goodwin’s mom and dad live right next door. “Having his Gigi and Poppy living next door will be a huge asset,” remarked Goodwin.

But Goodwin said she has a challenge for the naysayers and those who believe she can’t or shouldn’t go forth with her pregnancy.

“I just challenge them that if they can live my life better than I do – more power to them.”

The pregnancy is considered to be extremely high risk, but Goodwin is keeping high hopes. Her baby, which is going to be a boy, is currently healthy and moving according to schedule.

Goodwin has already chosen Beckham as the name. As for how she plans to deliver, either naturally or via cesarean section – that’s still up in the air.

By Matt Mershon, Reporter for KATV

Spinal-cord injuries: The uphill push for a cure