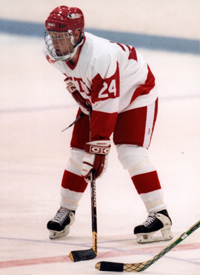 Travis Roy first put on ice skates at just 20 months old. As years passed, his love for the game of hockey quickly became a passion. In the fall of 1995 Roy accomplished one of his dream goals by earning a hockey scholarship to Boston University. At twenty-years of age he entered into his first collegiate hockey game. Eleven seconds into his first shift, his life changed forever as he crashed into the boards and cracked his fourth and fifth Cervical vertebra, paralyzing him from the neck down.

Despite this ill twist of fate, Roy has continued to persevere and defy the odds. With an intense Rehabilitation regime, he has regained some movement in his right arm. While coming to grips with his life as a quadriplegic, he returned to Boston University less than a year after his accident. Four years later, he graduated with a degree in public relations from Boston University’s prestigious College of Communication. In the storied history of BU Terriers hockey, Roy’s #24 is the only jersey to have been retired.

An articulate advocate for individuals living with spinal cord injuries, Roy is a frequent speaker on the hope research carries and the need for increased funding, including testifying before a US Senate Committee hearing for The National Institute of Health in Washington, DC and the Massachusetts state legislature. In 1997, he founded the Travis Roy Foundation, a 501 (c)(3) nonprofit that focuses on finding a cure for spinal cord injuries and provides grants to spinal cord injury survivors in financial need to help them purchase costly adaptive equipment necessary to live more active and independent lives.

Actively involved in the activities of the Foundation that bears his name, Roy is a popular motivational speaker and has also worked as a color commentator for college hockey games on ESPN and WMTW-TV8 in Maine. A Boston, MA resident, he spends his summers with his family on Lake Champlain in Vermont. Roy can also be found supporting his Terriers at Boston University hockey games, or with a paint brush in his mouth working on his latest work of art.