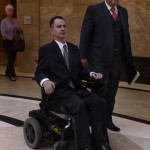 Brandon Coats is a quadriplegic who was fired by Dish Network after failing a drug test in 2010. The company said it has a zero-tolerance drug policy.

Cannabis consumption is cause to be fired in Colorado, the state’s supreme court has ruled, despite the drug’s legal status and the appeal of a quadriplegic man who was fired for using medical marijuana.

Six judges unanimously ruled that Brandon Coats was lawfully fired for failing a drug test in 2010. Coats’s former employer, Dish Network, agrees that he was never intoxicated while at work, but maintains a “zero-tolerance” drug policy.

The case sets one of the first precedents for the uncertain status of marijuana around the country: a handful of states have legalized recreational marijuana, more than 20 have legalized medical marijuana under various conditions, but the federal government still considers marijuana an illegal Schedule-1 drug, alongside heroin and ecstasy.

Under Colorado’s “lawful activities statute”, justice Allison Eid wrote in the opinion, “the term ‘lawful’ refers only to those activities that are lawful under both state and federal law. Therefore, employees who engage in an activity such as medical marijuana use that is permitted by state law but unlawful under federal law are not protected by the statute.”

“Although I’m very disappointed today, I hope that my case has brought the issue of use of medical marijuana and employment to light,” Coats said in a statement.

The Coats case joins supreme court decisions from California, Montana and Washington with rulings that medical marijuana patients can be fired by their employers for consuming cannabis.

Coats argued that state law shielded him from termination because he only consumed marijuana outside of work. Dish countered that marijuana’s illegal federal status means that state law does not protect him.

A telephone operator with Dish for three years before he was fired, Coats had asked the court for a narrow ruling that would have applied only to people whose jobs are not hazardous, whose faculties are not impaired at work, and whose employers have no contracts with the federal government.

Coats was paralyzed in a car accident and has used medical marijuana for six years to treat muscle spasms, in accordance with Colorado state laws. Before the random drug test he told his supervisors that he would likely fail.

Meghan Martinez, the attorney for the company, argued last year that the issue was about standards for employees and employers: “this case need not be an endorsement or indictment of medical marijuana.”

Colorado has expanded its first medical marijuana law in the 15 years since its passage, and in 2012 it legalized recreational marijuana.

Trial and appellate judges also upheld his firing as lawful, deferring to the federal law that deems marijuana illegal. The 2013 appeals court ruled that “for an activity to be lawful in Colorado, it must be permitted by, and not contrary to, both state and federal law.”

One judge dissented in that ruling, arguing that “lawful” should be interpreted by state and not federal law.

Dish offered a statement after the ruling reiterating its policy: “Dish is committed to its drug-free workplace policy and compliance with federal law, which does not permit the use of marijuana, even for medicinal purposes.”

Linux on Power from IBM for Critical Stem Cell Research

Paralyzed boy won’t give up without a fight