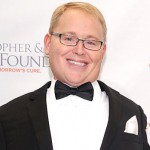 BOSTON (CBS) — It’s been 20 years since Travis Roy’s hockey career came to an end, just 11 seconds after it began.

A freshman at Boston University, Roy took the ice as a Terrier for the first time on October 20, 1995 — the same night the team raised their 1994 National Championship banner. Roy was hoping to be a big part in raising a few more banners over his four-year career, but those dreams came to a halt shortly after he climbed over the boards and hit the ice for his first shift as a collegiate athlete.

Just seconds after the blades of his skates touched the ice, Roy took a hit and fell awkwardly into the boards. Teammates and fans at Walter Brown Arena held their breath, waiting for the freshman to get back up. That never happened.

Roy, just 20-years-old at the time, broke his fourth vertebrae in the fall, leaving him paralyzed from the neck down. Two decades later, Roy said the injury not only broke his neck, but his heart as well.

“Hockey was my love. I grew up around the game,” Roy, who was the stick boy for the Maine Mariners in Portland when he was a boy, told WBZ NewsRadio 1030’s Adam Kaufman earlier this week. “I love hockey; I love the locker room, the ice, the feel of a stick in my hand.”

In an instant, that was all taken away. He’d spend the next six months in the hospital and rehab.

Roy doesn’t like to recall that night, but he remembers it as if it all happened just yesterday.

“I remember waiting for my first shift, the speed of my teammates and the 3,500 fans at Walter Brown Arena, the energy. I dreamed of that day. I dreamed of that moment and I was so proud to stand on the blue line as they raised a National Championship banner that night. I’ll never forget jumping over the boards after we had scored and lining up for a faceoff, just not believing that I got to be out there,” he said.

While the sting is still there, the support for Roy has been remarkable in the two decades since that horrible night. He received truckloads of letters while he was in the hospital, which his father read to him over the long days and nights. Roy was back at BU just 10 months after his life changed forever, and saw all of the support and love first-hand from his fellow Terriers and the city of Boston.

That support was so strong then, and continues to be just as strong 20 years later, that it inspired him to star the Travis Roy Foundation in 1997. So far, they’ve not only helped countless individuals and families dealing with spinal cord injuries, they’ve donated over $6 million for grants and research looking to make paralysis a thing of the past.

“It’s been an amazing ride, one that I’m proud of,” he said of his foundation. “We’ve certainly made what was a bit of a tragic story early on a very positive one. We can all feel good about that.

“We’re funding a program called The Big Idea, which shows progress and the return of bowel function. We all want to walk, but you have to start one piece at a time,” he said. “To have that control back, it would be a big change for those of us with spinal cord injuries and make our lives a little easier.

“I’ve always been hopeful I would walk someday. I don’t know if that’s going to happen, I’m still hopeful. If I could move my hands, move my arms, get myself in and out of bed and be independent and not need the 24 hours of care, that’s the other drive. To me, 20 years ago that wouldn’t have been good enough. But I’m a little wiser, and if you could provide me with full independence, that would change the lives of a lot of people dealing with spinal cord injuries.”

Roy will never give up the hope that he will walk again, and is confident that one day, people will not have to fear paralysis.

“I do believe it’s going to happen,” he said. “Whether I benefit or if it’s my nieces and nephews, the next generation — it is a devastating injury. Not just to the individual but also to their loved ones and family and friends.

“We are getting there, and that hope is very much alive,” he said.

The foundation hosts numerous events throughout the year, including the Boston Wiffle Ball Challenge, which is now in its fifth year. The Challenge has raised over $400,000 for Roy’s foundation and the Franciscan Hospital for Children in its four years, and will take place on Saturday, June 20 from 9 am- 3 pm at Boston University’s New Balance Field in Allston (click here to register or donate).

“Wiffle ball is a great equalizer. Nobody takes it serious and it’s just a good day to come out and enjoy the weather and support two good causes,” said Roy. “What’s better than playing a little Wiffle Ball on a Saturday afternoon?”

Not much, especially when it goes to such great causes.