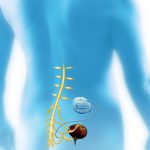 War veteran Adam Douglas has become a Bionic Man in his battle to recover from horrific injury.

The 43-year-old suffered horrendous spinal damage after he was blown up by a rock-propelled grenade.

He was one of the first casualties of the 2003 Iraq war and spent nine months in hospital being treated for a double back fracture and spinal cord injury.

Adam, from Fearnville, Leeds, had to use walking sticks and was unable to control his bladder or bowel.

But now a £20,000 operation to have electrodes surgically implanted into his tailbone – attached to two pace-makers hidden under skin in his lower back – has given him his dignity back.

He says the op has transformed his life and that of his wife Maria and their two daughters, Jessica and Sophie.

He told the YEP: “At the moment I feel like I am the Bionic Man.

“I’ve got implants in my spinal cord and two battery packs just above my buttocks.

“When I had first had the operation they had to leave wires sticking out to attach an external battery while they checked everything was working.

“A lot of the time during the operation I was awake as they needed to place these implants on my spine and make sure they weren’t damaging anything.

“I’ve got some new scars but it’s radically improved my quality of life.

“This application of the implants is one of the good by-products that can come from war.”

Adam said his ‘batteries’ will need changing every five to seven years.

He said: “This relatively new technique is called ‘sacral neuromodulation’. In layman’s terms, there is an electrode that we put into the tail bone – the sacrum.

“The pacemaker is connected to this and generates a current to that electrode and into the nerves that supply the pelvis. This changes the way the nerves supply the pelvic organs which are important for bladder and bowel control.”

Mr Harris, who served as a medical officer with The Light Dragoons before becoming a surgeon, said: “For veterans who have sustained spinal injuries resulting in bowel or bladder problems this is a technique we should be offering.” Today Mr Douglas will host the official launch of The Forgotten Heroes charity at Richardson & Co solicitors in Leeds.

Earlier this month, the charity, which Adam founded to offer support and help for veterans’ families and carers, gained registered status after a £5,000 fundraising campaign.