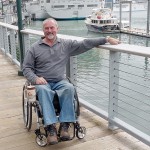 It wasn’t that long ago that Dan Thomas thought he had it all.

After years of hard work – he bought his first dump truck at 18, and had worked in the truck and excavating industry for nearly 30 years – the Newton resident, then 45, had a wife, a business and a house he’d paid off.

Then, in 2002 while driving home along 32 Avenue late one winter night, Thomas hit a patch of black ice, and rolled his truck into a tree.

His injuries – which he says included crushed lungs and two vertebrae in his back “basically disintegrating” – left him paralyzed from the waist down.

And he lost more than just his mobility. Without being able to work, he was forced to close his business, and eventually, he split up with his wife. Even a few longtime friends, he says, eventually deserted him.

But still, Thomas, now 58, has managed to look on the bright side – though he quickly admits such an outlook has sometimes been difficult.

“I worked hard my whole life, and when I was younger I always said I wanted to retire by the time I was 45, so I guess I did,” he laughed. “It just wasn’t quite the way I’d planned it. But that’s life, man.”

There were, and still are, very tough days – he deals with chronic pain he deems “manageable” but also has unexpected bouts of intense nerve pain in his leg that was once so intense it caused him to break two teeth because he was clenching them so hard.

“Unbelievable torture,” he called it.

But while he was rehabbing his injuries, Thomas also discovered an organization, Spinal Cord Injury BC (SCI BC), which he credits with helping him get his life back in order.

The organization provides support for those with spinal-cord injuries, bringing people together for social outings and other events.

On Sunday, Thomas will take part in the Scotiabank Charity Challenge, a 5-km event which is part of the Vancouver Half Marathon, and is raising money on behalf of SCI BC.

He will be part of a team of nearly 60 people who will be participating in support of SCI BC.

“They’re a great organization, and the thing I like about them is that the money they raise goes directly to people with spinal-cord injuries,” Thomas explained. “Sometimes, you donate to different research groups, and you never really know where the money goes, but this directly helps people.”

Thomas credits the group for helping him understand that being disabled doesn’t mean he can’t stay active, whether it means playing basketball or tennis, sledge hockey, taking in the Abbotsford Air Show or going on a cruise.

“I have pain issues, but over the years I’ve found the only thing that’s really helped has been to have a distraction – to get out and do things,” he said. “Dealing with this, it can be tough. You don’t prepare for it, you don’t think you’ll ever be paralyzed, but then it happens and you have a lot of years left where life isn’t what you thought it would be.

“But you have to get out there. You can’t sit around and dwell on your situation.”