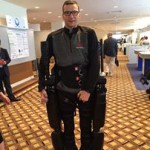 Mitch Brogan is among those rare few who refuses to take no for an answer.

When doctors told him he would never walk again after suffering a spinal cord injury in 2006 that left him a quadriplegic, Brogan set about to prove them wrong.

Far from willing just to sit in his wheelchair and watch life through the windows, he began pursuing an interest in exoskeleton technology.

After a 2011 visit to Rex Bionics in New Zealand, it was only a few more months until Brogan took a walk across the kitchen of his home in Byron, wearing his own custom-built bionic legs.

Fast forward to 2015 and Brogan’s house has now been transformed into homebase for Able Bionics, “a gait neuro-rehabilitation company that specializes in exoskeleton therapy and sales.”

In simpler words, “(We) typically get people that can’t walk or have trouble walking, up and walking again using robotics,” said Brogan.

Looking down the road, Brogan can see even more situations that could be improved with the use of bionics. Not only will they be useful assisting people with spinal cord injuries, but also those who have suffered a stroke, using variable assist exoskeleton technology to supplement some of the walking tasks. “If you have any power on your body, which typically somebody with strokes is affected on one side, our robot can allow the user to put in some of that power and the robot put in the rest of that power. It really opens up who we can serve.”

Outside of the use of exoskeleton technology, the Able Bionics facility also includes an Erigo gait trainer, therapy pool and FES (Functional Electrical Stimulation) cycle allowing users to bicycle under the power of electrical stimulation.

But even bionic legs are no match to keep up with Brogan’s mind and ambition.

In addition to racking up the air miles while getting the message out about exoskeleton technology at various conferences and expos, he has been interviewed by a variety of media outlets ranging from local news to South Korean TV and he’s made an appearance on the hit CBC show Dragon’s Den.

Businesswise, plans are in the works not only to move to a new London location this fall, but also for a second Able Bionics location in Aspen, Colorado. Long range, Brogan has also been approached about the possibility of opening another southern Ontario location and to create a business plan for a similar facility in Taiwan.

One of his most cherished memories since acquiring his Rex legs was “a fun little experience” in which he was able to get up and dance while attending a friend’s wedding. “My spotter walked away to get drink and told me to stay still but I didn’t listen at that point and just kept on dancing.” He went on to explain how a dance move went awry and he started to fall over. Luckily others on the dance floor saw him tipping over and caught him and lowered him to the floor. “So I was on the ground, the music stopped and I see all these heads over me, so I just kinda reached my hand up and said I am good. Five or six people then helped scoop me up on my feet again, the music starts and we are all dancing again.”