CONYERS, Ga. – Jimbo Boyd and Delorean Williams, who goes by the nickname “Bean,” are looking for a new set of wheels at R & R Mobility Vans in Conyers because in a few months, Bean, will be driving again. 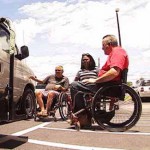 What brought these two together is that both use a wheelchair. Jimbo, now 55, suffered a spinal cord injury at 15, jumping from a roof into a pool.

He says, “As accidents happen, I miscalculated the projection and landed in about 5 feet of water.”

Bean, now 30, was injured in college. Walking to a concert, she was hit in the neck by a stray bullet, and instantly paralyzed the waist down.

Bean says, “Whew, I never thought it could happen like that. This may sound a little ignorant, but I thought being paralyzed– you were born with it.”

Jimbo threw himself into his recovery, becoming wheelchair athlete.

He says, “First time I borrowed a friend’s racing chair, I knew it was the sport for me. And so it began, 5k, 10ks, half marathons, marathons.”

Jimbo raced in the Peachtree Road Race for 29 years straight, before a rotator cuff injury forced him to retire. That’s how he met Dr. Sami Khan of Resurgens Orthopaedics.

Khan has watched Jimbo take on his next challenge: mentoring other spinal cord injury survivors, like Bean.

He says, “That purpose and drive helped him overcome a significant injury. He went through this first hand, a great teacher I think he’s the ideal person to pass this information along to other people.”

Jimbo says, “I’ve always tried to help those along the way. When I was hurt, I didn’t have anyone come in my rehab who had learned the ropes.”

For Bean, adjusting to her new life – and years of rehabilitation – took more time. But recently, she’s started really pushing herself out of her comfort zone.

She recently learned how to skydive, something she says she never would have had the courage to do before her spinal cord injury. Now safely back on the ground, in November, she’ll start driving classes at Shepherd Center, with Jimbo cheering her on.

He says, “I want to be there when she starts driving. I’ll be in the back of the van as a passenger.”

Checking out specially-equipped vans, Bean is excited about this idea of driving.