Five Years After Being Paralyzed from the Chest Down, Dustin Shillcox Completes the New York Marathon 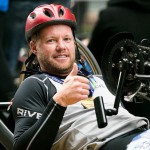 After crossing the finish line in the New York City Marathon Sunday, hand cyclist Dustin Shillcox had a message for the millions of people living with paralysis. “I’m living proof nothing is impossible.”

The 31-year-old from Green River, Wyoming, is paralyzed from the chest down, but that didn’t stop him from racing in the marathon and crossing the finish line in one hour, 46 minutes and 49 seconds.

“It’s hard to put into words how I felt crossing the finish line,” Shillcox said. “I thought about Christopher Reeve, and the millions living with paralysis who are told there is no hope for recovery.”

Shillcox wants them to know: “There is always hope and today was proof that nothing is impossible.”

For that, Shillcox said, “I have Christopher Reeve to thank. He was the spark that started this movement,” he says, referring to the late actor’s efforts to improve the lives of those living with paralysis and find a cure. Thanks to a groundbreaking treatment called epidural stimulation, funded by the Christopher & Dana Reeve Foundation, Shillcox can now stand and move his hips, legs, knees, ankles and toes with the flick of a switch.

“It’s life-changing,” he previously told PEOPLE of the treatment, which involves implanting a device on the spine to stimulate the nerves and remind them how to work again. “It can get people out of chairs and living a healthier life,” says Shillcox, who is one of four men to receive the experimental treatment so far.

“I owe everything to Christopher Reeve,” he previously said. “Without him, I am not sure if research would have progressed this far.”

After years of tireless advocacy by the Superman actor (who was paralyzed in a tragic horseback riding accident), his son, Matthew Reeve, announced the “huge breakthrough” in the treatment of spinal cord injuries last year, sharing a video (below) with PEOPLE showing the amazing progress of Shillcox and three other men with spinal cord injuries.

All of the men were told they would never be able to move again below their necks or chests but are now able to stand and move their hips, legs and toes with the help of the device, called an epidural stimulator.

Not only have they all regained their ability to stand and move below the waist, but the treatment also had an unexpected benefit: the return of bowel and bladder control and sexual function as well as improved cardiovascular and respiratory function.

“As Christopher Reeve said, nothing is impossible,” Shillcox said before the marathon. “Every day, I get to prove my diagnosis wrong and challenge the doctors who told me standing would be impossible.”

By competing in the marathon, Shillcox said he hopes to inspire the six million people living with paralysis in the U.S., including nearly 1.3 million with spinal cord injuries, and he hopes to help raise money to bring the treatment to others.

“I hope that my marathon experience inspires people living with paralysis to take on new challenges and try something they thought was impossible. When you get injured, you are told everything you can’t do,” he said on Sunday. “Well there’s a lot we can do as long as we challenge our limits and believe. You just have to give it your all and let nothing get in your way of the finish line.

“My muscles are tired and my shoulders are sore, but every mile was worth it and I will never forget this experience,” he added after the marathon. “It was a huge moment in my recovery. Now I have to get dancing again so I can hit my ultimate goal – dancing with Taylor Swift.”

In search of the perfect stem cell medium at Davis