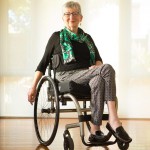 Are women with disabilities “vulnerable”? Far from it, says Keran Howe.

She doesn’t like the term, believing it makes the woman she has worked with as an advocate for more than 30 years seem passive, or submissive.

Instead, women with disabilities are targeted, says Howe, by people who use sexual abuse and family violence to control and intimidate them. And when they report their abuse they are often disbelieved.

Howe is the executive director of Women with Disabilities Victoria, which last year launched a landmark report that showed women with disabilities are more likely to be abused by perpetrators, including partners, children, parents and carers.

On Wednesday she was given a lifetime achievement award at the National Disability Awards in Canberra for her advocacy, including raising the profile of violence against women with disabilities in mainstream discussions.

Growing up in Deniliquin, in southern New South Wales, Howe wanted to become a nurse. But at age 19 she was in a car accident that left her with a spinal cord injury, so she opted to study social work instead.

“It was a profound experience, it certainly does make you rethink who you are and the perceptions that people have as your identity changes,” she says. “Fundamentally I felt I wasn’t any different, but everyone was talking as if my life was completely changed. Inside you’re not any different to who you were the week before it happened.”

Life as a social worker in regional health centres, and later the Royal Women’s Hospital, was a fascinating mix, a “minestrone” of counselling, cancer support groups and finding emergency accommodation for women fleeing violence, she says.

For more than 30 years she has watched community attitudes towards disability change, but there is still a failure to recognise the different experiences of men and women with disabilities and what services they need, she says.

And there are significant violations of human rights, Howe says. These include the wishes of people with disabilities not being taken seriously.

“Even if a woman is saying she doesn’t want intimate personal care to be provided by a man, there is no guarantee that she will be provided with a female worker,” she says. “It’s not dignified, it’s not respectful and it tends to reinforce the idea that women with disabilities are asexual.”

Other winners include Victorian disability advocate Julie Phillips, for her work on equal opportunities for students with disabilities, and Park Victoria, for the introducing disability-friendly changes like all-terrain wheelchairs.