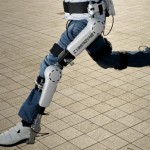 TOKYO — Japan’s health ministry approved on Wednesday sale of a wearable walk-assist robot for use in medical facilities, underscoring the government’s push to promote such products as part of growth strategy.

The HAL for Medical Use, lower limb type, from startup Cyberdyne is the first wearable medical robot approved for sale in Japan.

The product is designed for use in healthcare facilities by patients with eight incurable conditions including amyotrophic lateral sclerosis (ALS), muscular dystrophy, spinal muscular atrophy, and spinal and bulbar muscular atrophy, given height and weight requirements.

Cyberdyne originated at the University of Tsukuba. Yoshiyuki Sankai, a professor there, developed the technology and heads the company as president.

Sensors attached to the thigh and other parts of the body detect the weak signals from nervous system, and the motor-powered limbs facilitate the movement of the patient’s joints by leading them in the desired direction. This helps the body remember how to walk, according to the company.

The robot could delay the progress of a disorder, or help regain leg function.

Clinical trials at a national hospital in Niigata Prefecture and elsewhere showed that 24 patients who underwent nine sessions of exercises over a three-month period could walk greater distances than those who did not undergo such exercises.

“We hope to introduce it initially to eight hospitals including the Niigata hospital,” Sankai said. If the treatment qualifies for insurance coverage, the company will work to expand the application to spinal cord conditions, too.

The robot is already approved in Europe. In Germany, one session of 60-90 minutes costs 500 euros ($530). Coverage by public health insurance is currently being pursued. But work-related injury insurance fully covers 60 sessions. The bulk of cases are for spinal cord injuries.

Other medical robots, such as the endoscopic-surgery assist system da Vinci, have been on the market, too. But a wearable one is rare. The Japanese health ministry likely was driven by a sense of urgency to do everything in its power to combat incurable diseases and age-related conditions in a graying society.

Cyberdyne filed with the health ministry in March, aiming to get approval in nine months under an expedited screening process available for medical equipment to treat rare diseases. The actual process took only eight months, highlighting the government’s eagerness to promote such products as part of growth strategy. “There is the feel that big reforms are underway to create a new medical industry,” Sankai said.