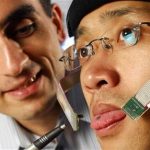 ATLANTA (AP) — The tireless tongue already controls taste and speech, helps kiss and swallow and fights germs. Now scientists hope to add one more ability to the mouthy muscle, and turn it into a computer control pad.

Georgia Tech researchers believe a magnetic, tongue-powered system could transform a disabled person’s mouth into a virtual computer, teeth into a keyboard – and tongue into the key that manipulates it all.

“You could have full control over your Environment by just being able to move your tongue,” said Maysam Ghovanloo, a Georgia Tech assistant professor who leads the team’s research.

The group’s Tongue Drive System turns the tongue into a joystick of sorts, allowing the disabled to manipulate wheelchairs, manage home appliances and control computers. The work still has a ways to go – one potential user called the design “grotesque” – but early tests are encouraging.

The system is far from the first that seeks a new way to control electronics through facial movements. But disabled advocates have particularly high hopes that the tongue could prove the most effective.

“This could give you an almost infinite number of switches and options for communication,” said Mike Jones, a vice president of research and technology at the Shepherd Center, an Atlanta Rehabilitation hospital. “It’s easy, and somebody could learn an entirely different language.”

That’s quite a contrast to the handful of methods already available to the hundreds of thousands of Americans who are disabled from the neck down.

The “sip and puff” technique, which lets people issue commands by inhaling and exhaling into a tube, is among the most popular. But it offers users only four different commands, limiting their options.

Control systems that use sophisticated pads to measure neck and head movements are also widespread, but using the hardware can be tiring, and frustrating on smaller electronics like computers.

And while newer innovations that track eye movement are promising, they can be costly, slow and susceptible to mixed signals.

The tongue, though, is a more flexible, sensitive and tireless option. And like other facial muscles, its functions tend to be spared in accidents that can paralyze most of the rest of the body, because the tongue is attached to the brain, not the spinal cord.

The tongue’s promise has long enticed scientists. In the 1960s, research work focused on turning the tongue into a primitive lens by attaching electrodes to the tissue. More recent studies have connected a camera that activates tongue electrodes in the shape of an object, helping blind people sense images.

A Palo Alto, Calif.-based company, newAbilities Systems Inc., has already designed a nine-button keypad placed on the roof of the mouth to control electronics.

Ghovanloo’s work, however, centers on creating a virtual keyboard instead of a physical one. He does that through a magnet about 3 millimeters wide that’s placed under the tip of the tongue.

The magnet’s movement is tracked by sensors on the side of each cheek, which sends data to a receiver atop a rather bulky set of headgear. It is then processed by software that converts the movement into commands for a wheelchair or other electronics.

After turning the system on, users are asked to establish six commands: Left, right, forward, backward, single-click and double-click. A graduate student who tested the technology was cruising the lab at will in a wheelchair, tongue firmly in cheek.

Early tests involving Georgia Tech students are encouraging, and the team’s work has already attracted a $120,000 grant from the National Science Foundation and $150,000 from the Christopher and Dana Reeve Foundation.

But plenty of challenges await. Researchers must pare down the bulky headgear, which looks like a prop from a 1980s movie, into a dental retainer. The team also must improve the software, tinker with the size of the magnet and boost the wireless battery’s charge.

Above all, they must find a way to keep costs in between the “sip and puff” systems, which can cost hundreds of dollars, to more sophisticated eye-tracking systems, which cost thousands.

The design certainly needs improvements. “It’s in its infancy and quite grotesque,” he said. But Cochran said its potential for almost limitless control options makes him want to shelve his “sip and puff” wheelchair.

“You could control not just your chair, your TV, your computer, but your entire life,” he said. “And it’s all one system.”