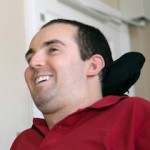 Ryan Atkins was on path to graduate from UC when a devastating 2009 car accident left him paralyzed from the shoulders down. Six years later, he completes the journey.

THAT FALL PROMISED TO BE HIS BEST EVER.

Ryan Atkins was in his third year at the University of Cincinnati on a full scholarship through the prestigious Carl H. Lindner Honors-PLUS business program. His beloved UC football team was undefeated that season and on their way to the Sugar Bowl. Thanksgiving break loomed, bookended by a jaunt to New York for a college conference and a trip to Europe that spring.

The athletic 21-year-old was on top of the world as he and four fraternity brothers set off on Nov. 20, 2009, for a retreat in Tennessee. Then, in an instant, that world was upended — and with it, Ryan’s carefully crafted plans for the future.

At first blush, Ryan’s is a tragic story: Promising young man, struck down in his prime by a life-altering accident that partially severed his spinal cord, leaving him paralyzed from the shoulders down. Eating, dressing, brushing his teeth — the most mundane tasks beyond his reach.

But the reality that unfolded defies that narrative: Promising young man who refused to allow a broken neck to break his spirit, who discovered peace and purpose in his faith and forged ahead on a journey he never planned and a future he never imagined.

“Some people may look at my situation and feel sorry for me, but the truth is God has blessed me with more gifts over the past six years than I could have ever imagined,” Ryan says. “God has opened doors for me that I didn’t have before.”

It was a team of firefighters who cut open the first door that crisp November day along a Kentucky highway. A simple overcorrection of the steering wheel sent the undergraduate’s SUV barreling into a guardrail, his third and fourth vertebra cracking as the vehicle flipped several times before coming to rest in a heap of crumpled metal.

The force of the crash ejected three of the SUV’s five occupants from the vehicle. Ryan and his front seat passenger Mike Jarvis, Bus ’13, bore the brunt of the injuries; Jarvis is now paralyzed from the chest down. The three backseat passengers suffered minor injuries.

Emergency responders extricated an unconscious Ryan and airlifted him to a trauma center where his heart stopped for 108 seconds in one of three cardiac arrests.

As Ryan clung to life, hundreds of well-wishers from the UC community and beyond joined his family – parents Jerry and Carol and sister Laura – in holding their collective breath, wondering if the gregarious college student would survive. He awoke days later from a medically induced coma in a haze of confusion and fear.

“You have a Christopher Reeve-like injury,” one doctor told him, referring to the late quadriplegic actor and spinal cord research advocate.

“You’ll never walk again and will be on a ventilator for life,” another told Ryan and his family.

But even as he lay paralyzed amid the whoosh and beep of machines, rendered mute by the breathing tube in his windpipe, Ryan mobilized his resolve.

Ryan poured himself into rehabilitation. Each day he pushed muscles once honed by years of playing baseball through an exhausting repetition of exercises. His respiratory therapist declared him an “overachiever” in his mission to wean himself off the ventilator — it was gone after four months.

News from campus buoyed Ryan’s hopes. Jeri Ricketts, director of UC’s Lindners Honors-PLUS business program, delivered a bulging scrapbook compiled by his classmates. UC’s basketball team crowded into Ryan’s room at the rehabilitation center. Huddling shoulder-to-shoulder, the towering athletes prayed for the recovery of the ardent fan who had once rooted for their success on the court.

After arriving home that spring in 2010, Ryan grasped at normalcy. He enrolled in a summer accounting class and begged rides from fraternity brothers to campus events in his new set of wheels — a wheelchair-accessible van. He celebrated his 22nd birthday and built a fantasy football roster. By fall however, Ryan’s once hopeful idealism waned.

The former honors scholar struggled to remember even small details. He fell asleep during tests. Grueling physical therapy left him exhausted. Simply getting through the day at times seemed as insurmountable as Everest. Willing his damaged spinal cord to send nerve signals to the furthest extremities of his body? Herculean.

“I realized it was a battle I really couldn’t win on my own,” says Ryan. “The thought of being back full-time in classes — I just couldn’t handle it at that point. That’s really when I came to the end of my rope.”

He refused to give up. Ryan’s high school yearbook hints at this innate resilience; a selected quote by the Scottish theologian William Barclay runs alongside his senior portrait: “Endurance is not just the ability to bear a hard thing, but to turn it into glory.”

But finding glory in a traumatic spinal cord injury? That required a power beyond his grasp. Although he’d grown up in a Christian home, Ryan had long ago sidelined his faith. Now, lying flat on his back, he reached for grace.

“Growing up, I heard the parable of Jesus healing the paralyzed man. I thought maybe Jesus would heal me and I would get back on my feet, as if he was some sort of genie I could turn to,” says Ryan.

But as he sought healing of a different kind, something more profound began to take place.

“I turned to seeking the healer and not just the healing,” says Ryan. “Walking initially was the highest priority on my list, but now I realize that’s taken a back seat to my faith journey.”

That journey led Ryan in 2013 to launch the blog flatonmyback.com, where he shares his story of finding glory in a life repurposed. Using voice-activated software, the once introspective Ryan soon began connecting with others.

“The overall new perspective on life that I’ve been given and have had the chance to share with others has been huge,” he says.

Ryan also found it easier to open up in real life – especially with the pretty young therapist who visited him several times a week for therapeutic massage.

He had met Stephanie Perry in the second grade. Ryan, then an 8-year-old with a mop of dark hair and buck-toothed grin, spent much of that school year valiantly trying to win the heart of the flaxen-haired girl with oversized glasses.

Despite co-starring in the class play — “The Clever Turtle” —and a series of highly orchestrated goofy tumbles in front of her, Ryan came to the sad realization: Stephanie was just not that into him. Their fate was seemingly sealed when she later transferred schools.

Though both went on to attend UC, their paths never crossed. Ryan’s accident finally provided the catalyst for their reunion. Stephanie, now in school to become a licensed medical massage therapist, immediately offered up her services.

“It was awkward at first,” admits Stephanie, whose slender frame belies buff biceps shaped by kneading the knotted muscles of patients. “What do you talk about when you haven’t seen each other in 13 years?”

As Stephanie worked to relieve Ryan’s atrophied muscles, their professional relationship began to evolve. Stephanie admired Ryan’s inner peace, the ways in which he had embraced the transformed landscape of his life. Ryan was smitten by Stephanie’s selflessness and how they both seemed to connect spiritually.

In the summer of 2012, Stephanie gathered her courage and haltingly gave voice to her feelings.

“We were talking about my dating life, and I told him that I wasn’t finding what I was looking for in all these other guys. That was a nice transition into, ‘By the way, I am seeing those things in you,’” she says.

A dumbfounded Ryan floundered for words. “Thank you,” he finally mustered. “I’m flattered.”

“I walked out having no idea how he felt about me,” Stephanie says, laughing.

Ryan, now 27, remains confident he’ll walk again someday, but he no longer dwells on the what-ifs. Instead, he’s learned that true miracles aren’t always about reclaiming what’s lost; sometimes they’re about finding the miraculous in what remains.

Still, there’s no escaping his body’s frustrating limitations. The discovery of a pressure sore earlier this year restricted him to his bed for seven months. His body, prone to muscle spasms, often leaves him tense, sleep deprived and largely confined to home.

Yet Ryan chooses to devote his greatest energies to the moments that sustain him, those unpredictable joys and sorrows that define a life, and his faith in a God he believes is using him for the greater good.

Last year, he fulfilled his longtime dream of returning to UC when he enrolled in online business courses. It was a different experience without the bustling energy of campus life, Ryan admits, but one filled with unexpected blessings.

“I wanted to finish what I started,” he explains. “When I needed the UC community the most, they were there for me. When I was ready to go back, they helped in every way possible.”

One professor visited him at home to review course and degree requirements. Another allowed him to do an exam by phone. Ryan discovered a passion for commercial real estate, a field that after earning his bachelor’s degree in business administration in December, he plans to pursue professionally.

Ryan and Stephanie have expanded into video-blogging to further share their faith. Also keeping the couple busy: plans for a fall wedding in a church near campus.

“The big hope that I intend to share throughout my life now is that our time here on earth is limited, and I really want to make the most of it,” says Ryan.

Today, the couple is convinced that, in some mysterious and divine way, their lives have been carefully orchestrated. They even have proof.

About a year after they reconnected, Stephanie discovered her second grade scrapbook. Flipping through the worn pages, she stumbled across a photo of her with Ryan. Pasted beside it, a long forgotten assignment: “What I learned about the Bible and following Jesus…”

“I learned that God did many miricals,” her childish hand had scrawled. “I liked the one of the parelized man the most.”

The big picture for John Rotche has never looked brighter