What’s Next? In Limbo With Syrian Refugees Who Have Spinal Cord Injuries 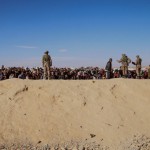 “Do you eat eye?” the man asked me, tearing meat away from a sheep’s skull.

I was the guest of honor at a small apartment on the outskirts of Amman, Jordan, where a group of about 15 Syrian refugee men all live together. Their uniting bond is their paralysis: All have spinal cord injuries from fighting in the Syrian civil war.

A few of the men had been my patients back in 2013, when I volunteered at a spinal cord injury apartment in Amman. At the time, their situation struck me as hopeless. I had good reason to feel that way — but I turned out to be wrong.

People with spinal cord injuries have complicated conditions that require special beds, cushions to prevent bedsores, physical therapy, wheelchairs, medications and more. In the United States. it can cost tens of thousands of dollars a year for each patient. For some, the first year alone can cost upwards of $100,000.

In Jordan, I thought, things could only be worse. There’s no primary care, and no consistent medical care for these men except for hospital visits. Yet their condition puts them at risk for myriad complications.

They all have tubes in their bladders because spinal cord injuries make them unable to pee. These tubes are nests of bacteria, leading to repeated infections.

Now that they aren’t using their leg bones, their bodies start to dissolve them, making them brittle. The extra calcium in their blood from the dissolved bone makes them prone to kidney stones.

Nerve pain from their severed spinal cords can shoot through their legs, much like that vibrating, electric pain you get from hitting your funny bone. Worse, sometimes that pain is constant. Lacking nerve stimulation, their muscles can become contracted, causing painful cramping.

And Jordan is no safe haven for them. No one knows exactly how many Syrian refugees with spinal cord injuries are living in Jordan, but we do know that many remain hidden. As former fighters that crossed into Jordan illegally, they could be deported back to Syria or confined in a special refugee camp if they are discovered by Jordanian authorities.

Many refugees are injured: According to a study published last year by Handicap International, about 1 in 15 Syrian refugees living in Jordan was hurt in the war, 72 percent of them men.

When I left Jordan in the spring of 2013, many of the patients from the spinal-cord injury apartment where I’d volunteered were destined to scatter to wherever they could find support and housing. Given the daunting risk of complications, I doubted I’d ever see most of them again.

But on a recent visit, I was surprised to see how well some of the guys were doing, many of them resettled into a different apartment in the suburbs of Amman,

Consider Yasir. He’s kept most of the urine infections at bay through some unorthodox antibiotic use; antibiotics are available over the counter in Jordan. He’s also gotten rid of his bedsores and takes no pain medications. Even without the proper equipment and cushions, he’s kept the bedsores away. In short, he’s done an amazing job with what was available to him.

And in the cohesion of his new peer group, he’s left any sectarian sentiments behind. When I asked where a patient who was new to me was from, Yasir told me: “We’re all Syrians. It doesn’t matter where he’s from.”

But it’s not all sunshine and rainbows. Ahmed had just returned from getting X-rays at the hospital. With his brittle bones, his leg was broken during a physical therapy session, but the surgical repair went poorly. The metal rod in his thigh was too long, scraping on his kneecap whenever he bent his leg, including when he got out of bed to a wheelchair.

I emailed the X-rays to a Syrian-American orthopedic surgeon who recommended the surgery be redone. One surgery is expensive enough; now the limited resources shared among the men in the apartment will need to be spread more thinly to find the means to do a second.

Strictly medically speaking, Ahmed and many of the others would do better in a country with accessible, high-quality health care. But there are barriers to emigrating. In addition to the drawn-out refugee resettlement process, there are the practical matters of how to live after arrival.

Yasir (not his real name) applied for asylum in the U.S., but he was told by U.N. officials that he would only get about eight months of support once he landed. After that he would be on his own. Requiring a wheelchair for mobility after an injury to his lower back, Yasir, who speaks only a few words of English, gave up on his application.

“I don’t know anyone there, how could I be independent in eight months?” he asked me.

Which lays bare one of the major problems many refugees face, regardless of their disability: the question of what’s next. Like these men, many are stuck in limbo where they’re not allowed to work and do not have access to a formal education system.

So they wait. In the meantime, the Internet is their education, their classes derived from their friends’ posts on Facebook, lessons gleaned via Skype chats with their friends still in Syria, still fighting the war.

For one afternoon visit, I had the fortune to learn with them. After an afternoon catching up about old friends, looking at X-rays and talking about chronic urinary tract infections, we sat down to a memorable lunch that included stuffed intestines, tongue, brain and, of course, eye.

While honored by the gesture of being offered delicacies by those struggling to get by, I was secretly elated to just eat intestines and tongue, and pleasantly surprised to discover they were better than I expected.

I’m still not yet ready to try eye.

But I’ll never forget that meal, and what I witnessed among those injured Syrian men: As with their injuries, they had made the most with what they had. And they were grateful.