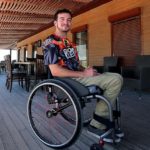 DUBAI // Taking a painful incident and turning it into something positive is how paralysed US skydiver Jarrett Martin has responded in helping to raise funds for research on spinal cord injuries.

The 25-year-old Dubai resident will be taking part in the Wings for Life World Run, a global charity race that takes place on 34 tracks across six continents at the same time. A run will be taking place on Sunday at the Dubai Autodrome, for the second year in a row.

“Being one of the few people in Dubai with a spinal cord injury and being very vocal about it, I got approached by the charity, and it’s all about finding a cure,” said the Wings for Life ambassador and qualified master parachute rigger at SkyDive Dubai.

Mr Martin, who hails from ­Seattle, noted that some people with spinal cord injuries “succumb to their lives being over”, while others were inspired to take positive action.

“I’m one of the people who got extra motivated,” he said.

“We are hoping for more awareness and funding in the hope that there will be no such thing as incurable spinal injuries in the foreseeable future.”

Mr Martin was paralysed from the chest down after he was injured in a parachuting accident in Hawaii. He was 18 and a professional skydiver at the time.

“I was doing a special type of parachute stunt, sort of a sport between paragliding and skydiving,” he said. “I hit the side of a mountain and suffered a massive amount of damage – I broke my back, a whole bunch of internal organs were messed up and the aortic vessel in my heart got separated. I am very lucky to be alive.”

After six months of rehabilitation, he felt ready to attempt a skydive again, which he said was filled with emotion and adrenalin.

“The first few months after the accident were dark, and I was depressed. But my friends, family and the skydiving community around me said, ‘Nah, we’re gonna get you back on that airplane, no problem’. And we did,” Mr Martin said.

“We figured a way to secure my legs for free fall and I just slide on my bottom, kind of like a baseball player, right to my wheelchair.”

He said he always remembered what someone told him about life in a wheelchair – you can do anything you want to do, you just have to do it differently.

The Wings for Life World Run will take place on Sunday at 3pm. The race has no finish line, as runners try to keep ahead of the catcher car that gives participants a head start. It then chases the runners at a predetermined speed.

People can register online at www.wingsforlifeworldrun.com/ae/en/dubai/ for Dh195.

All money raised will fund research on spinal cord injuries.

“You never know where life will take you. If I can do it, anyone can do it,” Mr Martin said.

The Whole World Is Watching