Justin Falls is a pharmacist, a driver, a “Tough Mudder” racer and, most recently, a pilot.

A self-described “dare devil,” he is a guy who just can’t keep his feet on the ground, by choice and by circumstance.

“I had been in school (college) for two months, went to a party with some friends and ended up having a freak accident — fell off a fire escape and broke my neck,” Falls said.

Two weeks later, he woke up in the hospital, paralyzed from the shoulders down — quadriplegic.

“The doctors said they couldn’t do any other surgery. At that point, I kind of wish I had just died,” he said.

It already had been a tough time for his family. His dad — his role model — had been diagnosed with cancer.

“Life hit a wall. Some of the worst, darkest days of my life were that time. Luckily, I had family and friends who were there for me and supported me and encouraged me to keep going,” Falls recalled.

A year of therapy helped Falls regain some strength in his left hand and both arms. Though still, by medical definition, “quadriplegic,” he finished pharmacy school at Wingate University and started a career at Frye Regional Medical Center in Hickory. But, he still had that itch for adventure and never forgot a childhood dream.

“When I was a kid growing up, I could see planes flying over.” Falls said. His house is less than a mile from Gastonia Municipal Airport.

That might bother some people that its noisy, but I was always fascinated. Always look up.”

He still looks up, so he recently felt inspired to act on the childhood fascination. He had heard about a Chapel-Hill-based scholarship program called Able Flight, which helps adults with disabilities become certified sport pilots.

Licensed pilot and former aviation journalist Charles Stites founded Able Flight a decade ago, after seeing a similar program in Europe and realizing there was no such program here in the U.S.

“Our goal is to increase people’s self-confidence and self-reliance. A secondary goal…is to change the way people look at other people with disabilities. If you can fly an airplane, you have to fly it to the same standard as anyone else. There are no breaks, no “give mes” on that,” Stites said.

“It’s aviation boot camp. It’s not summer camp. We teach to twice the standard than the FAA requires for this particular license, the sport pilot certificate,” Stites said.

Falls was up for the challenge, and upon receiving an Able Flight scholarship, headed to Purdue in May.

He was assigned one of the flight school’s specially-adapted planes, but he depended on his one good hand and some good sense to fly it.

“Once I’m wheeling out on the runway, I have to use my left hand to help me switch my right hand onto the stick, which operates the pitch of the airplane and the roll.”

From supervised instruction to solo flights, Falls was ready for his final check ride.

“I was so incredibly nervous. In pharmacy school, I never had to worry, if I failed a test, about dying. I was told beforehand if the instructor shakes your hand, you know you passed. You know you’re a pilot,” he said.

The instructor shook his hand. Falls had passed… with flying colors and a community request.

“For anybody watching or listening to (or reading) this, maybe your thing’s not flying, and maybe you’re not paralyzed…but what’s preventing you from doing whatever strength you have? Everybody can do something…”

“I want the people to explore the possibility that this person is capable of doing amazing things,” he said.

“When you’re up there, it’s the ultimate freedom.”

And, it’s the freedom to feel close to the only co-pilot he needs — his dad.

“I really wish he had been here to see me where I am now. He always told me that I was meant to do something great with my life.”

Falls has done just that. He is a guy who defies gravity in more ways than one and is always…wheels up. 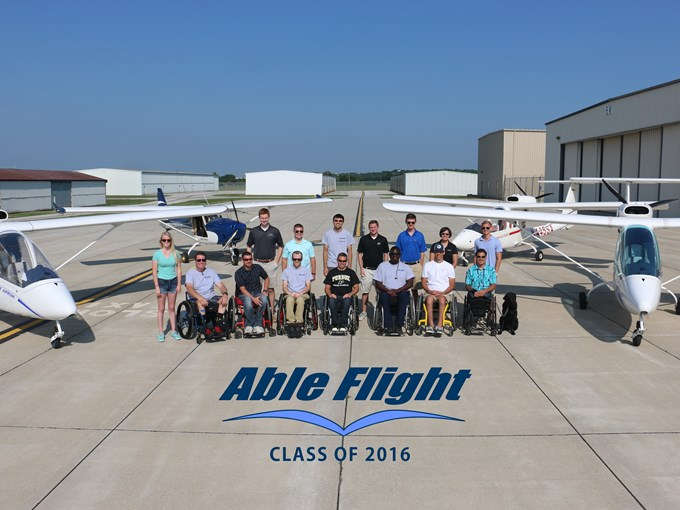 FAA Regulations For Pilots With Disabilities:

If certified sport pilots, like Falls, were to want to fly commercial planes, they would have to pass a medical flight certification test to receive a first-class medical certificate.

We are not aware of any quadriplegic pilots who are medically certificated.  Pilots with disabilities that do not involve mobility are handled on a case by case basis.  The nature of the disability and treatment would factor into whether they can receive a medical certificate. For example, PTSD is considered to be a disability, but if a pilot is treated, he or she can be medically certificated to fly a commercial aircraft,” Bergen said.

But, as Able Flight’s Charles Stites added, most commercial airplanes are not adapted to pilots with certain physical disabilities.

“I think there’s some realities you deal with. For example, you’re not going to find an airplane manufacturer of a large aircraft – a commercial airliner – willing to adapt their airplane for a single pilot. It’s just not cost-effective,” he said.

But, both Stites and Justin Falls told WFMY News 2 they are hopeful the aviation industry will continue to expand in other ways to help pilots with disabilities achieve career dreams.