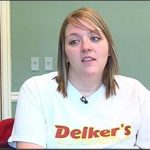 TEMPERANCE, MI — Cortney Hoffman is on the road to recovery. Nearly seven years ago the then 16-year-old rolled from Temperance her car, crushing her spine and becoming paralyzed from the shoulders down. Now, twice a week in two-hour increments she works out with trainers at the YMCA.

“We work out in the chapel so we don’t have to go to church on Sundays,” Hoffman laughs.

Her spirits are high and she believes she will someday walk again. She believes this in part because in 2005 she underwent an experimental stem cell surgery in Portugal. She was one of the first 40 people in the world to have it done. Doctor’s used her own stem cells from her nasal tissue and inserted them into spinal cord injury.

“I have gotten so much back. I am driving now and I don’t think I’d be driving if I hadn’t gone through that”

Cortney believes that adult stem cell surgery like hers could be one step closer to reality in the United States. President Barack Obama is reversing the limitations on Federal Funded Embryonic Stem Cell Research. He is now leaving it up to the National Institutes of Health to control what scientists can do with Federal money. Cortney believes that this move opens the doors to “all” kinds of stem cell research not just embryonic.

Opponents to this move by President Obama say human embryos are human lives, and they will be sacrificed for the sake of science.

Hoffman says it’s a step in the right direction, believing in research. She believes she is living proof of the positive effects stem cells can have on someone with a spinal cord injury. “A lot of people are against it, until they know somebody that would benefit from it.”

She sings, she dances, all from her wheelchair