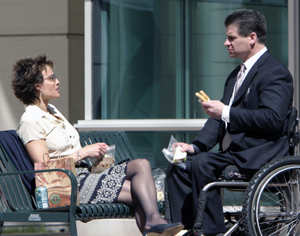 Steve Peters knows trials and tribulations. Only a few, however, are related to his work as a lawyer.

Twenty-five years ago, Peters was terribly injured and his wife was killed in a car crash with a drunken driver. Paramedics thought Peters was dead, too. Five hours passed before they realized he was alive and transported him to a hospital. He ended up a Paraplegic at age 22.

While Peters was prosecuting a drug case in 1987 for the U.S. Justice Department, someone tossed a Molotov cocktail into an elevator at his apartment building. He escaped unharmed.

Peters, who works for the Denver office of Lindquist & Vennum, has spent the past month defending former Qwest vice president John M. Walker against fraud and conspiracy charges. It’s the highest-profile corporate fraud case to date involving Qwest, the Denver telecommunications company sent into a tailspin in 2001 as the technology boom imploded.

“He is one of those people – and there are many – who go on to do remarkable things with their lives,” said longtime friend Kenny Hosack, who counseled Peters at Craig Hospital in Englewood after the crash. “His Disability is certainly an annoyance, an aggravation, but I think he’s transcended it.”

Neither Peters, 46, nor his wife, Renee Mona Peters, whom he married in November, would comment during the trial.

But conversations with friends and associates painted a portrait of a sometimes stubborn, always competitive man who has never accepted defeat. That steely drive has allowed him to become an elite ski racer, as well as complete the arduous Ride the Rockies cycling trek in 2002 on a hand cycle.

It was a summer night in Kansas in 1979. Peters; his wife, Annabel; and a friend, John Kellstrom, climbed into the couple’s Opel Manta and headed home from a party.

Peters had just graduated from Kansas State University. He and Annabel planned to leave for Duke University in North Carolina, where Peters would study law, his dream since watching “Perry Mason” on TV as a kid.

As they motored along just after midnight, another vehicle driven by an 18-year-old came toward them. The young female driver was drunk. Her car drifted across the center of a highway about 4 miles west of Abilene, Kan., and struck the Peterses’ Manta head on.

The impact killed Annabel, who was driving. Kellstrom ruptured his spleen. Paramedics whisked Kellstrom and the 18-year-old woman, who had a broken ankle, to the hospital. They left the Peterses for dead.

The crash ruptured Steve Peters’ spleen and his aorta, the primary artery pumping blood from his heart. He could hear but could not speak or move. He laid there motionless, semiconscious for nearly two hours. His extremities, primarily his legs, were getting no oxygen.

When paramedics returned, they found a weak pulse, but a driving rainstorm kept the medical helicopter grounded. So Peters took a 100-mile ambulance ride to a Wichita hospital. Five hours passed between the crash and his surgery.

The young man wheeled himself into Kenny Hosack’s office at Craig Hospital in the spring of 1980. He sat in an old wheelchair ill-suited for him. He had survived a horrible car crash but was still suffering.

Hosack and Peters introduced themselves. Peters began telling his story. Both men ended up in tears.

“Typically, people that have a spinal cord injury are grieving the loss of who they used to be and the uncertainty of how life can be in the future,” Hosack said this month, recalling his counseling of Peters. “He was also grieving the loss of his wife and trying to figure out what he was going to do with his life.”

The injury to Peters’ aorta had stemmed the flow of blood to his legs and damaged his spine, paralyzing him from the waist down.

He spent a year in Physical Therapy, learning to walk again with straight-leg braces and crutches.

Peters recovered physically. His athletic torso, shoulders and arms added thick muscle, while his legs atrophied. He went on river-rafting trips with Hosack and others, strapping himself to the gear-chest at the raft’s center.

By the late 1980s, he was competing in 10-kilometer races and half-marathons in his wheelchair.

But age and strain eventually took their toll on Peters’ shoulders, forcing him to abandon the braces and crutches for a wheelchair. Shoulders were not built to work as hips. He needed neither to practice law.

After graduating from law school at Duke in 1983, Peters returned to Denver. He joined the law office of Sherman & Howard, where he spent four years.

Jim Hautcinger, the now-retired Sherman & Howard equity partner who hired Peters, described Peters as “doggedly perseverant, never took the easy way out, always saw everything through to a conclusion.”

In 1987, U.S. Attorney Bob Miller hired Peters as a federal prosecutor in Denver. In his first year, Peters’ apartment was firebombed during a drug trial he was prosecuting. A witness in the case also was shot, but the FBI never solved the crimes.

Peters’ highest-profile prosecution has been of bargain-furniture magnates Gary and Marcee Levine for bankruptcy fraud and embezzlement. In 1991, a federal judge sentenced both to 45 months in prison.

After seven years as a federal prosecutor, Peters went into private practice. He joined the Denver office of Reinhart, Van Deuren. In 1998, he went to work for Lindquist & Vennum, where he is a partner.

In addition to defense work, Peters began to draw clients in cases involving access for disabled persons. Craig Hospital, where Peters served as a board member for 10 years, became a source of referrals.

Of particular interest to Peters has been access and service for disabled passengers on airlines. He has helped clients sue airlines for alleged violations of the Air Carrier Access Act five times. Four of those cases yielded settlements. The fifth is pending.

In the pending case, Blair Strasenburgh, a resident of Hanover, N.H., who uses a wheelchair, sued Continental Airlines last year for access violations and negligence related to his fall from a chair while boarding a flight at Denver International Airport. He alleges that Continental employees were not properly trained to help disabled passengers.

“He knows what I’m going through,” Strasenburgh said of Peters. “That definitely played a role in hiring him as my attorney.”

At first, Ronny Persson didn’t know what to make of the intense, dark-haired skier on his Winter Park disabled monoskiing team.

Persson, an affable Swede who trains each year in Winter Park, admired how Peters drove between Denver and Winter Park several times a week to train. Before races, Peters was Persson’s opposite – quiet and withdrawn.

Persson, who became a paraplegic after a four-story fall in his early 20s, pushed himself to become an expert monoskier. Peters did not begin competitive skiing until 2000, but he quickly became an elite amateur. He also became close friends with Persson.

“He’s a good all-around skier,” Persson said of Peters. “He can manage the whole mountain, and that is a good skill, in my opinion. He can take a double-diamond black (expert slope) if he wants to.”

Peters mastered the monoski, riding in a sitting position with his legs in front of him and using modified poles for balance. Paraplegic skiers turn by twisting their shoulders and, subsequently, their waists.

“Able-bodied skiers use knees and hips,” Persson said. “Instead of knees, we use hips and shoulders.”

Before races, Peters becomes focused and unapproachable. His training and competitiveness have helped him to podium, or finish third or higher in a race, five times.

He has yet to finish first, but he’s not done.

Peters married Renee, a nurse, in November after a three-year courtship that began with a blind date. Courtesy of a mutual friend at Craig Hospital, Renee found herself at a Colorado Avalanche game in October 2000 with a guy in a wheelchair. Peters’ seats, reserved through season tickets, are in the Pepsi Center’s front row on the glass.

The couple is now raising Renee’s children from a previous marriage.

Renee, who works as a legal nurse consultant, has often watched from the gallery in federal court as her husband defends John Walker. She has witnessed his tenacity. Earlier this month, he made a pointed but unsuccessful call for a mistrial following a government witness’ errant comment about the taboo subject of defense fees in the case. Peters said a prosecutor’s leading questions induced the comment.

The move drew praise from an attorney representing another defendant in the case.

“Steve Peters is flat-out brilliant,” said Jeff Springer. “He is a lawyer’s lawyer.”

And that, says Hosack, his longtime friend, is the kind of yardstick by which Peters should be measured.

“He’s an attorney, he’s a skier, he’s recently married,” Hosack said. “That’s how he defines himself, not as a paraplegic.”

Scientist’s discovery of role of Aquaporin in spinal injuries recognized with...