Could this be the first smart car for quadriplegics? 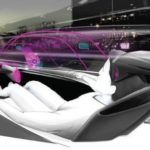 In a time where the driverless automated car is becoming a modern reality, we are provided with great potential to make things previously improbable if not impossible suddenly possible.

My interest was piqued when I came across design plans for car that could be controlled by a driver with quadriplegia. At first the idea seemed mere fantasy but as I spoke to transport designer Rajshekhar Dass and learnt move about the control of technical devices through brain waves, facial gestures and infinitesimal movements the idea seemed more of conceivable.

Rajshekar Dass is a car designer from Mumbai, India currently based in Turkey. He has an impressive design history which includes fronting a winner team of the 2016 Michelin Challenge Design for the Google Community Vehicle and  Winner of the  Vehicle, Mobility and Transport Design 2014-15 A’Design Award for a Micro Taxi among awards. He’s interned for Volkswagen in Germany and worked in a range of car dealerships, so has seen car technology from a range of angles.

He detailed his rationale for a car designed specifically for people with quadraplegia, a cohort of people who until now have only featured in the automated cars of the future as mere passengers. Such a design is the first of its kind:

“Audric Design basically was designed with a particular person in mind, Sam Schmidt, former Indy Racing League driver. He was made paraplegic due to a racing car accident in 2000.  He wanted to get back on the track but came back as an owner rather than driver. Everyone loves driving so my interest was how can we use today’s technology to solve these problems for an audience that are generally overlooked? How can today’s tech be used to enable the same driving experience that he enjoyed previously?”

“the first point of research is the capabilities of the human body when functionality has been impaired. In paraplegia the brain signals do not reach the human organs  bellow the neck, so the brain signals are basically lost. I thought, what if you could use today’s technology to enable the signals to be transferred to the computers onboard of a car instead, so you can give a rebirth to the whole driving experience?”

Dass explained that emerging technology like movement through brain wave signals,  gesture and facial recognition and sensor technology s along with  augmented reality made his design more than a well intentioned concept.

There’s precedence here. For example, in 2010  Emotiv released the Emotiv Epoch+, a commercial wearable device designed to enable users to play computer games on a screen through functioning as a brain-computer interface device (Admittedly the design was not without it’s challenges as this review attests).

Then in 2014, Ian Burkhart became the first paralyzed person to use neural bypass technology to pick up and hold a spoon using his own brainpower, with his abilities increasing overtime.

I’m aware that many people with paralysis experience involuntary movement such as spasms and jerking. I wondered if a car could be smart enough to distinguish these movements from voluntary actions.

It’s a good point. The car is completely autonomous and the AI is constantly monitoring the driver’s motions to learn his/her actions, and since the AI is specially developed for paralyzed drivers it can recognize such involuntary movements. Since the AI is also scanning the brain and can understand that the motion has no connection with the brain signals it can be tagged as involuntary action and not require a reaction”.

As well as its driving capabilities, the car would also be designed specifically with the needs of the driver in mind with a rear entry door suited to a wheelchair which would be specially designed to become the driving seat in the vehicle. Dass explained that the project has only been recently published online and he is keen to explore his ideas further with people with disabilities and associated organizations to enable further development.

In an era where ideas as seemingly bizarre as Google’s patent for“sticky” technology to protect pedestrians if they get struck by Google’s self-driving cars, a mind powered car doesn’t seem all that strange at all.

Dass is working on a range of diverse projects currently and judging by the ingenuity inherent in his design portfolio, this is simply an example of things to come.

Sharpening for a cause