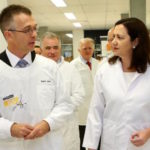 QUEENSLAND researchers are a step closer to human trials of a potential treatment for spinal cord injuries involving transplants of nasal cells combined with physiotherapy.

Griffith University neuroscientist James St John said he hoped to start a trial within three years on the research after receiving more than $250,000 in funding from the Perry Cross Spinal Research Foundation.

Dr St John said he had been in preliminary discussions with neurosurgeons and physiotherapists at Brisbane’s Princess Alexandra Hospital but he needed $700,000 a year over three years before the trial could begin.

Queensland was the site of a world-first study of three severely injured spinal cord patients who had transplants of olfactory ensheathing cells more than a decade ago. The trial proved the therapy was safe, and one patient reported improved sensation in his legs, however the research stalled because of a lack of funding.

The cells, which form part of a person’s sense of smell, allow nerve fibres to be continually renewed. When the spinal cord is damaged, scar tissue forms at the injured site, preventing nerve fibres from regrowing.

There has been renewed interest in the approach since Bulgarian fireman Darek Fidyka received worldwide attention in 2014 when he took small, halting steps with the aid of a frame after surgery in Poland.

Nerve grafts from his ankle were placed across his spinal cord, which was severed in a knife attack, and olfactory ensheathing cells were implanted above and below the injury.

“He could feel and he could move his muscles, which is evidence that he’d made new connections in his spinal cord,” Dr St John said.

Although the breakthrough was hailed worldwide, Fidyka’s injury was the result of a stab wound, which is rare in terms of spinal cord injuries.

Most people damage their spinal cords in car crashes or as a result of a sporting injury, which can be more complex to repair than in Fidyka’s case. Queensland scientists hope to be able to develop an approach that will assist a range of spinal cord injuries.

“Spinal cord injury has often been seen, myself included, as being impossible, too difficult,” Dr St John said. “Now, people are thinking, ‘well, maybe we can do it’.

“We think in Queensland we can make a big impact. We want to become a world centre for this therapy.”

Instead of using nerve grafts, the team is working on a 3D-printed bridge that can be transplanted into patients’ spinal cords with the nasal cells.

Dr St John said although the ultimate aim would be to develop a treatment that ­allowed people with severe spinal cord injuries to walk, even small improvements in movement could enable a person to be able to dress themselves.

Donate to the Perry Cross Foundation at pcsrf.org.au

We are praying for a miracle