A Paralyzed Florida Surfer Finds His Own ‘Perfect Wave’ 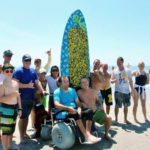 For engineer Matt Bellina, of Cocoa Beach, Fla., riding the perfect wave was a group mission.

More than 15 friends gathered on Florida’s Cocoa Beach on a Saturday morning this summer. Their task? Get 40-year-old Bellina back into the water surfing.

It wasn’t easy. On Memorial Day, 2014, the Bellina broke his neck, as he slid head-first down a water slide and into an inflatable wall. Bellina broke his C4 vertebra and damaged his high-cervical nerve. He’s one of an estimated 17,000 Americans each year who suffer a spinal cord injury and live. Bellina can’t walk, and has limited arm movement.

But, despite the odds, he wanted to surf again, and his friends wanted to help. They hoisted Bellina from a beach wheelchair to a sailboard that had been modified with a kayak seat. With four people on each side, they paddled Bellina out into the Atlantic.

Longtime friends, coworkers and family positioned themselves strategically in the water to rescue Bellina if he lost his balance and fell off the board. Though he wore a life jacket, there was an element of danger: Because of his injury, Bellina can’t hold his breath for long. If he slipped, they’d have to get his head above water fast.

And that’s exactly what happened on the first wave. As Bellina took off, sitting up in the kayak chair, he lost his balance and tumbled to one side — basically falling into the arms of a friend, but still getting dunked underwater.

The team quickly righted Bellina, and hoisted him up for another try. This time, the surfer tried lying flat on his back, and having his friends push him into a wave.

They let go — and it worked! Bellina was surfing again. He cruised through the water, grinning from ear to ear, as his crowd of friends cheered. He caught two more rides before taking a break.

Back on the sand, Bellina was hoisted back in the wheel chair and took a sip of fresh water. How did he feel?

Bellina lives in a condo on the beach, but being in the water is something else.

“I feel like I’m home,” he said. “I’ve grown up here, but I’ve lived in several different places. And being in the ocean has always felt like returning to home. That’s what it feels like. It feels like I finally get to be myself, even if for a few seconds.”

Research evidence shows that physical activity comes with a host of benefits for those with spinal cord injuries, said Dr. Santhosh Thomas at the Cleveland Clinic Center for Spine Health. And as Bellina’s experience demonstrates, the benefits go beyond any physical gains.

“It’s always good to get … people back to near-normal activities that they enjoy, Thomas said, adding that “with quadriplegia you need a pretty good support system to get to that level.”

Physical pain from the injury can be treated, Thomas said. But emotional wounds can be harder to handle.

“A lot of young adults who are the victims of these spinal cord injuries are devastated,” Thomas said. “And getting them back into activities they enjoyed before the injury almost certainly has positive effects.”

It can build friendships, he said, and help with cardiac conditioning, prevent bone loss, boost energy and help with self-image. Regaining some physical mastery can help with the anxiety and depression that are common after spinal cord injuries.

Tracy Farrell, executive vice president for physical health and wellness at the Wounded Warrior project, said the joy that Bellina experienced in getting back on the water is the sort of thing she sees all the time among injured veterans who engage in adaptive sports.

“You can look at studies that say physical health and physical wellness impacts depression, impacts PTSD, impacts cognitive abilities,” she said. “So any way we can get individuals moving again after an injury, the better their overall emotional health.”

Being able to return to a much-loved activity can be motivating — and transforming — in other ways, too, she said.

“When people get struck into the mindset of ‘this is what the rest of my life will look like,’ if you can challenge them to attain some sort of physical mobility again, many will strive and reach that challenge,” Farrell said. “And the water is a happy place for many.”

Science reporters at NPR have been exploring all sorts of waves this summer — from gravitational to seismic and more. You can find all our favorites here.