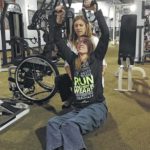 ROCKINGHAM — About two and a half years ago, 24-year-old Kandace Frye’s life took an unexpected turn following a car accident that left her without sensation or motor control of her entire body from just below her shoulders down — but living with a wheelchair hasn’t stopped Frye from working as a membership representative for FirstHealth Fitness Center in Richmond County.

Frye remembers the night of her accident, but said she doesn’t like to think about it often.

“On January 10, 2014, I was at work,” she recalled. “It was a Friday night. I got off at seven and met up with a couple of friends at around 9:15. I was an unrestrained backseat passenger. We took a left curve too fast and it was raining, so the roads were already bad. My friend was going too fast and over-corrected. We flipped several times. I was awake during the whole thing. It was all in slow motion. I still have sounds, like glass sounds, especially if I see another wreck.”

Frye added that she suspects she has mild post-traumatic stress disorder.

Sewell explained that such injuries are labeled by where they are located along the spinal cord.

“It has to do with what vertebrae, what bone,” she said. “The level defines what nerves are intact and what nerves are not intact. Incomplete injury is defined as something is still working — either sensation, movement or other body function. It means there is something that goes on down the spinal cord.

“A complete T4 means there is no sensation, no movement,” she continued. “A test was done on every level along the spinal cord to see if she felt anything at any level, and she could not. So she was complete during the ASIA scoring.”

Frye said in many ways, she still feels like a “newbie” at living with her injury.

“It doesn’t seem like it’s been almost 3 years ago,” she said. “I call that accident my second chance at life…I compare it to, you know when somebody dies, and your family and friends are all around you at first and gradually they return to the way things are. When I got home, I didn’t have everyone around me anymore, and all of a sudden reality hit me. I got down and depressed thinking about what my life could be like, what I could do.”

Now, with equipment installed in her car, Frye is able to drive using hand controls.

“That’s our whole goal of spinal cord awareness,” Sewell said. “We don’t like to look at it as a disability. She can drive, be independent, go to school, have a job and workout. If you or I were to drive the way she does, it would be like being a new driver again, being 16 and just learning to drive, using the hand controls.”

Frye said it took her nearly seven months to start moving on with her life.

“She had so set some goals for herself,” Sewell said. “She had to learn this wasn’t a death sentence. She needed to make some baby goals, and then make a bigger goal. Her car was a big goal, and that involved rehabilitation.”

Sewell said Frye is able to get in and out of her wheelchair independently.

“Having a sense of humor about things has been a coping mechanism,” Frye said. “There are bad days, but then you just move on. There’s still a lot that you can do. The main thing I tell people, working in a gym environment, is when they say, ‘Oh, this hurts. I don’t want to do this anymore.’ I tell them be thankful because you never know when that could be taken away. Be glad you can do it.”

Frye and Sewell plan to complete a half-marathon together in October at Myrtle Beach.

“I think one big misconception I hear is a lot of people look at Kandace and wonder when she is going to walk again,” Sewell said. “Well, we both believe in God and miracles, and who knows, she could (walk) again some day, maybe with stem cells. There’s no telling. But the focus should not be on walking again. It should be about what you can do next. I think there’s too much emphasis on the word ‘walking’ when working with severe spinal cord injuries.”

Sewell also said there are several things people don’t realize about what it’s like to be in a wheelchair in a small community. Having come from WakeMed in Raleigh, she said large cities are far more accessible for people using wheelchairs — from stores and restaurants to medical facilities.

“Kandace was nominated and selected by the North Carolina Spinal Cord Association to speak at their annual event on Oct. 27 in Raleigh,” she said. “One reason she was chosen was because of her ability to discuss the issues of accessibility issues of living in a small area. And more so, because she has taken a challenging situation and has gone above and beyond to turn it into a positive situation.”

“My goal is for people to find their own way to do things for themselves,” Frye said. “It would be neat to have a program here to make people aware of things.”

“She’s been able to do so many things that people think aren’t possible for her,” Sewell said. “And people see not only has she overcome her obstacles, but she also didn’t go to Raleigh for her rehabilitation. She does it right here, and she goes to YouTube and finds things she wants to try.”

Not everything is easy, Frye admitted.

“Certain doorways I go through are small,” she said. “But I overcome and adapt. Walking is overrated. I don’t know why y’all do it.”

Sewell said it is important that people understand the difference in spinal cord injuries and other conditions that require accessibility considerations.

“Little changes could make big differences,” she said. “Not looking at Kandace like she has a disease is important. A spinal cord injury is a new situation — not a disease, or even a handicap. It is what you make of it, and that’s the beauty of Kandace, is she has made the best of this situation.”

Frye said she has been more active since the accident than she was before it. She wants to complete a triathlon, which for her would involve wheeling the “run,” hand cycling and swimming. She also plans to continue motivational speaking.

“Kandace has spoken to groups for lots of reasons, like overcoming things, and motivation,” Sewell said. “She has advocated strongly for getting the things she’s gotten done, like getting her hand controls for her car, all the fitness stuff. She decided she wanted to work out, and she made it challenging.”

Frye said now that she’s working for FirstHealth Fitness Center, she feels even more capable of motivating others and inspiring them.

“She just got promoted,” Sewell added. “She works and she has challenges, lots of things to plan and do. People don’t have to automatically get on disability after a spinal cord injury. There are other things they can do.”

Event gets the wheels turning