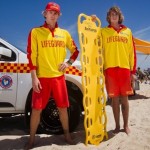 Surf lifesavers targeting swimmers who put themselves in harm’s way have dramatically cut the number of people getting suspected spinal injuries in the past two years.

There have only been 12 suspected spinal cord injuries at WA beaches since this surf lifesaving season began on May 1, according to Surf Life Saving WA.

There have been nine suspected spinal injuries at Mullaloo, Trigg and Floreat beaches – three each – and two at Cottesloe.

Doctors and surf lifesavers raised the alarm after the 2011-12 season, when a record number of spinal cases were reported. Many were from diving into shallow water, being dumped by waves or hitting sandbars.

During that season, 76 beachgoers were treated for suspected spinal trauma, the most since SLSWA’s records began in 2008 and up from 46 the previous season.

SLSWA chief executive Paul Andrew said preventive action by surf lifesavers had led to a reduction in the number of suspected spinal injuries at City Beach, where incidents had fallen from 26 in 2011-12 to seven last year.

Only one has been recorded at City beach this season.

Mr Andrew said the 2011-12 season had been a wake-up call, sparking a review of how SLSWA worked to prevent spinal injuries. He said the big figure that season had shown that people were not being responsible and were being injured as a result, meaning surf lifesavers needed to be more proactive.

The decrease could not be attributed to fewer people using WA beaches, with more people using them during the day than ever before.

“A number of our lifeguards and volunteers on the weekend are making a point on selected beaches, where there has been a high incidence of spinal injuries, to be quite proactive,” Mr Andrew said.

“If we can keep decreasing the figures by undertaking the proactive measures, we will be far better off.”

Royal Perth Hospital’s State trauma director Sudhakar Rao warned against complacency, saying the improvement shown by the SLSWA figures was positive but hospital figures did not show a fall in the number of patients with spinal trauma.

Dr Rao said people still needed to be careful when doing other water-related activities, such as diving, kite surfing and riding jetskis.

He said people needed to check water depth and changing conditions and that alcohol and water activities had proved a particularly bad mix.

Tourists who were not aware of WA’s surf conditions and people who were not physically fit were more likely to suffer a spinal injury. Most spinal cord injuries were preventable and the impact on individuals and their families was devastating.

Love – and a Little Help from New Friends – Keeps...