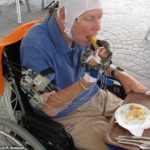 Scientists have developed a robotic interface which could help to restore fine hand movements in paraplegics.

By combining an electrode cap with an exoskeleton worn over the fingers, the device translates brain signals to hand movements.

The approach could provide paraplegic patients with the fine motor control needed to carry out everyday tasks such as eating, drinking and signing documents.

Exoskeleton technology, worn outside a person’s body, has huge potential to help to restore independence in patients who have impaired movement in their limbs – such as those with spinal cord injury or who have suffered a stroke.

In order to translate the brain’s intentions into movements, the robotic elements need to pick up on the electrical signals from the neurons – which would require an interface to be implanted in the brain.

But a team from the University of Tubingen in Germany has developed an external interface, which does away with the need for invasive electrodes.

Instead, the user wears a swimming cap-style interface, covered in electrodes, which picks up on brain activity and eye movements.

At the other end, attached to the wearer’s hand, is a robotic exoskeleton covering the thumb and forefinger, restoring the precision grip – such as when the hand holds a pencil.

The team trialled the technology with six paraplegic patients who had reduced motor function in their arms, none of which had used the type of technology before.

After a brief training period of around 10 minutes, they began using the interface to pick up and use a range of objects, from drinks cans to pencils and credit cards.

The results showed that the interface boosted their fine motor control and grip, enabling the volunteers to carry out tasks better.

Dr Surjo Soekadar, who led the research, told MailOnline: ‘Patients ask for devices that do not attract any attention, particularly when they go, for example, to a restaurant to have dinner.

‘Consequently, the next generation of these devices should be unobtrusive and almost invisible.

‘Also, users should be able to attach and operate the systems by themselves.

While the external system may not provide the fine level of control as a brain implant, but avoids the risk of post-operative complications, such as bleeding and infection.

The devices still need to undergo large-scale testing and technical certification before it can be made available commercially.

But a commercially available version of the device could be available within the next two years.

Beyond those with paraplegia, the interface could potentially be used to rehabilitate stroke patients who have lost movement in their arms.

Commenting on whether the interface could be used in paralysed patients, Dr Soekadar told MailOnline: ‘It is conceivable that this is indeed possible when incorporating more biosignals from the face and neck, and choosing a semi-autonomous approach.

The findings are published in the journal Science Robotics.

By Ryan O’Hare for MailOnline