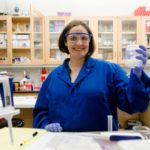 A UCLA professor is working to develop a treatment for spinal cord injuries, which are currently incurable.

Stephanie Seidlits, assistant professor of bioengineering, will attempt to use biomaterial made out of hyaluronic acid – a long chain of sugars in the body – to create a treatment that can be injected into spinal cords. Seidlits will conduct the research with students using a $500,000 grant she won March 1.

The prestigious CAREER award, granted by the National Science Foundation, aims to support scholars who effectively integrate research with education. Seidlits plans to use her research as a project for students in Bioengineering 177: “Bioengineering Capstone Design” next fall.

When the spinal cord is injured, HA, a polymer composed of long sugar chains that support tissue structure, breaks down into smaller fragments to initiate healing. The short fragments are supposed to be replaced by longer ones, but sometimes they stay in the spinal cord, causing inflammation that prevents healing, Seidlits said.

Past research has examined whether HA as a biomaterial can reduce scarring from spinal cord injuries, with mixed results. Seidlits said she thinks the difference in fragment lengths could be a cause for the different outcomes. Her research will determine whether she can control how the cells react to short and long fragments of HA to prevent inflammation.

“A big problem is that the people doing the chemistry don’t account for the fact that the short fragments act differently than long fragments,” Seidlits said. “They just put them all together.”

Seidlits and students will use the engineered device to test the biomaterial’s effectiveness before eventually testing it in mice’s spinal cord tissue.

Observing the cells through the device is better than observing them in a petri dish, which is unable to fully predict how the biomaterial impacts spinal cord cell regeneration in humans, she said. This also minimizes use of mice in experiments.

Arshia Ehsanipour, a graduate student researcher in Seidlits’ lab, said one of the challenges of engineering a biomaterial is integrating the HA gel material with the native spinal cord tissue.

“It’s a gel consistency, (so) cells have nowhere to crawl in (the spinal cord),” Ehsanipour said. “My goal is to get it to be more of a sponge so cells can crawl in and interact with the tissue more easily.”

Despite these difficulties, Josh Karam, also a graduate student researcher in Seidlits’ lab, said he hopes their research will be successful.

“The research we’re doing in the lab, the work we’re aiming for, is impactful because spinal cord injury is a neurodegenerative condition that affects a lot of people,” Karam said. “Ideally, we create a treatment that helps people to make paralysis a phase rather than a lifestyle.”

Seidlits said that if the device they will use to observe the HA chains works well, students in Bioengineering 177 will help publish the research and patent the device.