One Small Step for a Paraplegic, One Big Step Toward Reversing Paralysis 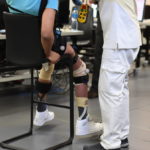 In a hospital in Switzerland, permanently paralyzed people are now learning to walk again with the help of stimulating electrodes implanted in their spines. For Grégoire Courtine, professor of neuroprosthetics at the Swiss Federal Institute of Technology Lausanne (EPFL), this day has been a long time coming. “It took us 15 years to get from paralyzed rats to the first steps in humans,” he says. “Maybe in 10 more years, our technology will be ready for the clinic.”

Courtine has made it his mission to reverse paralysis. He started 15 years ago with those paralyzed rats, putting tiny electrical implants into their spines to stimulate nerve fibers below the site of their spinal cord injuries. When the implant’s electrodes were powered up, Courtine’s team could train the rats, using a harness to support the animals while encouraging them to walk forward. “After two months of training, a rat that was completely paralyzed walked to the delicious piece of Swiss chocolate that we put at end of track,” Courtine remembers.

This miraculous feat was possible because the rat’s nervous system adapted to its injury with the help of the stimulation and training; the few nerve fibers around the spinal cord injury that had been spared from damage regrew and reorganized to bring commands from the rat’s brain to its legs.

But Courtine had no intention of stopping with rats, and worked to optimize the technology in monkeys. Now his research has reached an important milestone, as the first human clinical trial of the spinal implant system has just begun at the Lausanne University Hospital. Courtine described the new trial and the research that led to it at a talk at SXSW Interactive, the massive tech festival underway in Austin, Texas, and after the talk he sat down with IEEE Spectrum to get into the technical details.

In the clinical trial, patients use a scaled-up version of the harness the rats used, a rigging which supports them while they try to walk forward. “It holds them like a parent would hold a young child to take his first steps,” Courtine says.

The first person to get the spinal implant is a man who suffered a spinal cord injury five years ago that left him partially paralyzed. Before the implant, he was able to walk with support, but the stimulating implant drastically improved his gait. “When we turn on the stimulation, the movement is much more coordinated,” Courtine says. The trial will involve eight patients, with later patients having more severe injuries and higher levels of paralysis.

The trial is a proof-of-concept study to show the safety of the spinal implant and the basic efficacy of the stimulation. For each patient, a surgeon places the implant on the surface of the lumbar spinal cord in the lower back. The implant is a commercial device from Medtronic that’s already approved for use in spinal stimulation therapies for chronic pain. In the operating room, the researchers make sure that the implant is properly positioned so that its 21 electrodes can stimulate nerve fibers that both extend and flex the leg muscles. The stimulator is attached to an electric pulse generator that’s nestled inside the patient’s torso.

Once each patient has recovered from surgery, the researchers test out stimulation patterns. They turn on various electrodes at different current levels and map the effects on the patient’s leg muscles, enabling them to personalize the pattern and produce the best walking movements. But Courtine says the stimulating implant, which they chose because it already has regulatory approval, is far from ideal. “We are very frustrated by the number of electrodes,” he says.

For the stimulator, Courtine would also vastly prefer to use the soft, flexible electrodes developed by his colleague Stéphanie Lacour, another professor of neuroprosthetics at EPFL. She has developed stretchy implantable electrodes modeled after the dura matter, the membrane that covers the spinal cord and brain. But Lacour, also at SXSW, says her “e-dura” implants won’t be ready for clinical trials for some years.

The current human study will look for both immediate improvement to the patients’ walking ability as well as gradual improvement over five months. Courtine says he expects patients’ big strides to come from the nervous system’s remarkable neuroplasticity: “In rats and non-human primates, we see reorganization not just at site of injury, but throughout the nervous system,” he says. “The brain finds new ways to communicate with the spinal cord below the injury.”

There’s another big technological step required on the path to truly reversing paralysis. In a breakthrough study on paralyzed monkeys published last November, Courtine and his collaborators showed that inserting both a brain implant and a spinal implant provided much more natural walking movement. In that study, the brain implant in the motor cortex recorded the monkey’s intentions to move, and sent those decoded commands to the spinal stimulator.

Courtine doesn’t yet have permission to try this whole brain-spine interface in human patients, but he’s working with the international BrainGate corsortium that’s developing a clinic-ready brain implant. Using paralyzed patients’ natural brain signals is bound to bring big improvements in the control of their bodies. “Timing is so important, and the brain has perfect timing,” Courtine says. “Machines will never be able reproduce that exactly.”