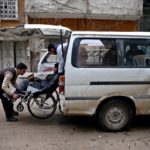 DOUMA, Syria, March 15 (Reuters) – Ziad, a paralyzed 14-year-old boy, often stays alone in his room as bombs fall on Douma, the main rebel-stronghold in eastern Ghouta on the outskirts of the Syrian capital Damascus.

Limited in scope, number and size, there are no nearby shelters equipped to receive Ziad who cannot be moved quickly or easily during airstrikes because of his spinal injuries.

“The shelters are not ready to accept people like me,” he said.

Until last year, treatment options were limited for spinal patients caught in a brutal civil war that has killed hundreds of thousands of people and displaced more than 11 million.

Now, the Specialist Centre for the Rehabilitation and Care of Spinal Cord Injuries provides physical and psychological treatment.

There are an estimated 500 people with spinal injuries in eastern Ghouta, almost all casualties of the six-year war. The center, currently funded entirely by donations, can treat 12 patients at a time for a course of three to six months.

Khalid Al-Hallaj, a physiotherapist who runs the center, says obstacles to rehabilitating patients in the midst of the conflict are formidable.

Supplies are scarce, especially mobility chairs and physiotherapy exercise equipment. The makeshift center also lacks adequate facilities to receive patients, with only one entrance for wheelchairs and no safety exits or shelters in case of shelling.

Al-Hallaj also struggles to transfer patients to and from the center because he lacks vehicles equipped to transport them. Paralyzed patients, often battling poor mental health, tend to live at home where they feel more comfortable.

“Many people suffer psychological trauma after an injury, which makes them come late to treatment. This worsens their condition and prolongs the time it takes to treat them,” he said.

Unlike most patients, Abu Zeid lives inside the center. After his injury, the 23-year-old, whose family lives in a government-controlled area, tried to commit suicide as he struggled to cope with extreme physical pain and come to terms with needing help for basic self-care.

Deep, crater-like scars on Abu Zeid’s arms are a reminder of what he endured and a marked contrast with his condition today. Having received treatment, Abu Zeid now has limited mobility, can visit the toilet by himself and is even hopeful he will walk again.

“The doctors say I will walk again, but I need to be patient and exercise a lot,” he said.

Daughter is inspired by mom’s injury