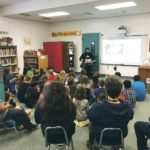 Simon Calcavecchia, 34, of Olympia, visited Evergreen Elementary School April 7 to talk to students about his books, his music and his disability.

He is the author of a children’s book series called “The Adventures of Frank and Mustard” and has also recorded a collection of hip-hop songs about his characters.

Addressing a room full of first-graders, Calcavecchia started by saying, “I want to tell you what you’re all probably curious about, which is why I am using this wheelchair.”

Calcavecchia grew up in Olympia and played high school football but never had the opportunity to score a touchdown, he said. In 2000, at the end of his junior year, he was invited to play rugby. “I asked, ‘What’s that?’” Calcavecchia said. “They told me it’s a game where anyone can score a touchdown and I said, ‘Sign me up.’”

After two years, his team, the first ever formed in Olympia, was ranked fifth in the nation and Calcavecchia was invited to play in Australia.

“I went into the scrum and I didn’t get my head low enough,” he said, describing the violent start of a rugby play. “My head hit my opponent’s shoulder, my neck broke, and my spinal cord was severed.” Then just 19 years old, Calcavecchia survived with C5-6 quadriplegia, explaining to the first-graders, “Where the spinal cord is severed, there’s a roadblock. My brain can’t communicate with my body below that.” He has some control over his arms but cannot move his fingers.

Calcavecchia was inspired to write a children’s book after a decade of volunteering with kids.

“I noticed there aren’t a whole lot of books that represent children with disabilities and the ones that I have seen weren’t very good because they felt like instruction manuals instead of meaningful stories,” he said.

His first book, “The Adventures of Frank and Mustard: Stuck in the Mud,” is about a dog named Frank who has wheels instead of rear legs, and his bird friend, Mustard. The story is about friends and strangers helping each other despite difficulties and differences.

“It’s based on a true story about when I got stuck in the mud,” Calcavecchia said. “I was driving around in my wheelchair in a park on a rainy day and the one trail I decided to go down ended up being the worst decision I could have made.” Park staff and bystanders rescued him, and that gave him his idea.

“We have a second book that will be out in two months and it’s called ‘Differently Awesome,’ and it’s about how Frank and Mustard go to the kickball field, but the kids don’t want to play with Frank because he’s different,” Calcavecchia said. His third book will be about bullying.

“This brings up something that I always like to talk to kids about,” he said. “It’s so important that we treat each and every person with the same kind of respect you’d want to be treated with. It’s already hard enough to deal with the challenges of having a disability and when people are mean because you’re different, it makes it even worse.”

In addition to writing, Calcavecchia spends much of his time speaking to students at various schools. “I do assemblies at elementary and high schools to tell my story and to educate about my own disability of quadriplegia,” he said. “It’s really been a life-changing opportunity for me.

“I spoke at Olympia high school and I had one kid who was diagnosed with MS (multiple sclerosis) and said, ‘What would you tell someone that was in my position?’ I said ‘I’ve lost 90 percent of my body function, but I’ve still found a way to live a life of passion and a life where I can dream and think big. No matter what you face in the future, there’s still a possibility for you to live a life that you love, even though it may not be the way you thought it would work out.’ It was really a powerful thing for both of us.”

After the Evergreen presentation, first-grader Taylor Erickson, 7, a lifelong KP resident, said about Calcavecchia’s book: “I thought it was pretty cool because even though you’re hurt, you can still have friends and be important to them.”

For more information, go to frankandmustard.com. The book and songs can be viewed on YouTube under “The Adventures of Frank and Mustard.”

From Wheelchair to Roller Coaster with Cole & Charisma at Disney