Researchers grew human spinal cord neurons from stem cells and injected them into healthy mice, where they successfully connected with other neurons.

The spinal cord is a rope of nerves relaying messages from the brain to every organ, muscle, and nerve ending in the body. The cells that make up the spinal cord aren’t a homogeneous mass, but rather a combination of dozens of specialized neurons, each with its own important role to play in guiding signals and impulses to the right destination.

This week, a team of California researchers announced the successful production of a lab-grown neuron that could help heal spinal cord injuries by reestablishing the connection between brain and muscle. In a paper published in Proceedings of the National Academy of Sciences, researchers from the Gladstone Institutes and University of California campuses in San Francisco and Berkeley described how they grew human spinal cord neurons from stem cells and successfully introduced the lab-grown cells into the spines of healthy mice.

Todd McDevitt is a senior investigator at Gladstone and lead author of the study. He said that his team chose the targeted neuron, called a V2a interneuron, because it serves as a “long relay cable” between the neurons in the brain and the motor neurons that connect directly to muscle. V2a interneurons are, in fact, some of the longest cells in the body, able to extend their axon — the nerve fibers that transmit electrical impulses — across several vertebrae.

“It’s one cell stretching out up to 1,000 times longer than a normal human cell,” said McDevitt. These outstretched neurons, as long as several centimeters, seem to play a critical role in relaying messages along the spinal cord. So if they are damaged in a traumatic injury, the brain-muscle connection may be severed, potentially leading to paralysis.

But if those critical V2a interneurons could be regenerated in an injured spine, the researchers wondered, perhaps the spinal cord could re-establish the connection and heal itself.

For the past three years, McDevitt and his team have been working to culture viable human V2a interneurons from pluripotent stem cells. The process, known as differentiation, attempts to replicate in the lab the natural development of neurons from undifferentiated stem cells in a human embryo.

Decades of research in developmental biology have provided clues to how genes in a developing embryo direct different proteins and other chemical factors to create all manner of specialized cells. The trouble is that most of the “recipes” for these chemical “cocktails” were derived from studying animal embryos.

“Obviously, for good reasons, we don’t do experiments on human embryos,” McDevitt said. “You have to take a leap of faith from the developmental biology knowledge we have from worms and flies and think about how we can apply that really important biological information to the human context.” 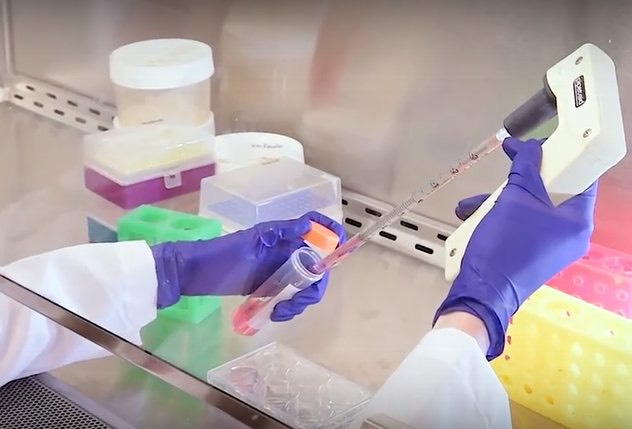 After experimenting with round after round of chemical combinations, the researchers landed on a process that can now produce a sizable batch of human V2a interneurons in a little over two weeks. The first step was to inject the cells into the spinal cords of healthy mice and see if the cells survived. They did even better.

“Within two weeks, we saw a number of these cells extend their axons over long distances — five millimeters reliably, but some even longer than that,” McDevitt said, adding that the wiry cells are also making important connections. “Even though they’re mice, we see these human cells that appear to be connecting to other neurons.”

Does this mean we’re close to a human therapy using injections of healthy neurons to repair damaged spines? Not quite. Trials will first need to be run with injured mice before any human subjects can be tested. Plus, it’s entirely possible that V2a interneurons only fix very specific types of spinal injuries, or none at all. It might require the production of other spinal cord neurons, or a combination of several, to find the most effective treatment.

“At the most basic level, this work shows that we can successfully introduce a new type of spinal neuron made from human pluripotent stem cells,” McDevitt said. “I see it as a step in what’s probably going to be a much bigger effort by the field.”