P.L.A.Y-ing, not just for kids anymore 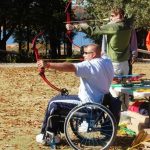 CLEMSON — It’s a day that many soldiers look forward to. A day where they’ve reached the end of their service time and are able to head home and fill the gap in the family that had been missing a parent, son, daughter or spouse. It’s a time when they can finally enjoy the comforts of home cooking, melt in a warm embrace and catch their breath because of hearty laughter, not because they’re in the middle of enemy fire.

For Jeff Snover, while on military leave from serving in Iraq, was soaking up time with his family and getting a head start on some work that needed to be done on his property in Tennessee. But, while clearing out an area on his land, a tree fell, trapping him and causing a spinal cord injury, paralyzing him from the waist down.

From that moment, Snover vowed to do everything he could to make the lives of disabled people a little bit easier and more enjoyable. Having seen first-hand the trauma that takes place in war and then living through a rare accident, he could relate to anyone looking for an outlet.

“For me, it was sports,” he said. “It gave me a new focus, and I thrived on training as hard as I could to be the best.”

Snover began playing wheelchair tennis and excelling in ping-pong, but before long, just as he was reaching competition status, his doctors delivered more bad news.

“I was starting to lose feeling going up my back,” he said. “My doctors told me, in order to stop that progression, I needed to quit training for tennis, both on the table and on the court.”

Knowing what a powerful and positive impact sports had had on his life after his injury, he went into brainstorming mode.

“I wanted to come up with something that would allow me to still be a part of sports and recreation while watching others benefit from it,” he said.

And so Champions Made From Adversity (CMFA) was born, a non-profit organization that aims to advance the lives of physically disabled persons and their families through sports and leisure activities.

Founded in August 2007 and based out of Augusta, Ga., CMFA has an on-going program that introduces participants to various sporting activities. In addition to their daily mission, the staff travels all over the Southeast helping with Rehabilitation events and getting the word out about their programs. 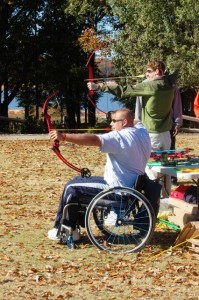 Lynne Cory, assistant professor at Clemson University, met Jeff at a conference and voiced interest in helping any way she could.

At the time, her latest endeavor produced Operation P.L.A.Y., a weekend-long event held at Clemson from Nov. 7 – 9 for injured service men and women, a companion and their children.

P.L.A.Y. — pleasure through leisure activity year-round — aimed at introducing injured or sick soldiers to new recreational sports. The goal was to help them heal, while equipping them with the knowledge and skill to take part in the same activities when they return home. Participants tried numerous activities like archery, air rifling, golf and cycling while their “leisure companion” — a family member, friend or spouse — tried them out alongside.

“It’s imperative to have a partner while in this program,” Snover said. “That way they can count on someone to be there when they get home to help, or simply join in.”

Scott Winkler, vice chairman of CMFA, had lots of encouragement from various friends and colleagues on his road to recovery after the spinal cord injury he suffered while serving in Iraq. It was enough for him to begin training in field events like shot put and javelin.

“In just three months, I was good enough to compete in Beijing for shot put,” he said. “I finished 5th out of 17 in the Paralympics. It was an incredibly proud time for me. That’s how we want everyone to feel. To stay positive and continue striving for dreams.”

In addition to incorporating a companion, children of the injured were encouraged to come along for the weekend as well.

“They make instant friends with kids who understand exactly what they’re going through,” said Barbara Brown, activity leader. “They’ve done crafts based on art and comedy and even taken a photography class and gone outside to capture moments. I don’t think they want it to be over.”

The soldiers felt the same way.

“I’ve done fishing trips before, but nothing like this,” said Dave Long. “My wife and two kids are here with me. It’s a nice change of pace and a necessary outlet. It’s beneficial to every one of us, and I’m appreciative of that and the beautiful campus that is Clemson.”

Paraplegic dad: ‘For everything I’ve lost, I’ve gained so much more’