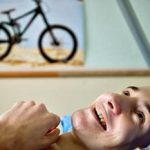 MOSCOW — Every three months, David Martin, a quadriplegic, returns to a small clinic here in the Russian capital for therapy he cannot legally get back home in Kalamazoo, Mich.: injections of stem cells taken from his own body, at a cost of $12,000 per visit.

Martin’s U.S. doctors have tried to dissuade him from believing any improvement in his condition could be the byproduct of stem-cell treatments, a therapy not yet approved in the United States. No scientific evidence has ever shown that such treatments can repair human spinal-cord injuries, experts say.

Yet Martin notices glints of progress — a twinge of sensation in one of his curled, still hands, a faraway feel of something cold on his skin. He attributes it to the stem-cell treatments he has been getting in Moscow.

“It’s definitely unfortunate that the U.S. isn’t doing this,” said Martin, 36, paralyzed since a car accident in 2006. “It’s not an inexpensive venture, and it’s not easy on the body to have to travel this distance.”

Martin is just one of a growing number of Americans and Europeans turning to Russia, China and other countries where the stem-cell industry operates unfettered — and largely unregulated.

NeuroVita, the clinic Martin has been visiting since 2007, attracts paraplegics and quadriplegics from around the world and maintains a waiting list for overflow clientele. Elsewhere in the capital, chic beauty clinics rely on stem-cell therapy to beckon Moscow’s moneyed elite, pitching the treatments as a surefire answer to wrinkles and stretch marks.

What troubles critics is the rush in some countries to offer stem-cell therapy on the health-care market, the absence of governmental oversight associated with stem-cell treatments in those countries, and the lack of any proof that the treatments actually work. If patients feel improvement, experts say, it’s likely a placebo effect or the result of their body’s own healing mechanisms.

While adult stem cells may be useful in treating cancer or brittle-bone disease, most experts think it’s impossible to turn blood-derived adult stem cells into nerve cells, and that anyone offering such treatments is not relying on peer-reviewed science.

“I don’t think there’s much science to it,” said Vladimir Smirnov, director of the Moscow Institute of Experimental Cardiology, a licensed Russian stem-cell researcher and a leading critic of clinics that sell stem-cell injections. “It’s all about making money.”

The wonder of stem cells lies in their ability to reproduce and differentiate into whatever variety of tissue the body requires. Adult cells do not reproduce, but stem cells divide freely. Stem cells also tend to seek out damaged tissue, making them catalysts for restoration. In recent years, scientists have been encouraged by research that suggests stem-cell therapy could one day be applied to a wide array of disorders and injuries.

A recent study involving rats with Parkinson’s disease showed that embryonic stem cells genetically altered to yield dopamine-producing neurons could be transplanted into the rats’ brains and improve Motor function. Other studies have shown that adult stem cells injected into mice with damaged hearts can repopulate heart tissue with new heart-muscle cells.

Doctors have been relying for four decades on bone-marrow transplants that use adult stem-cell technology to treat cancers such as leukemia and lymphoma.

But the U.S. Food and Drug Administration (FDA) has yet to approve embryonic or adult stem-cell injections to treat other disorders. The FDA allows stem-cell clinical trials involving humans, but the research is carefully controlled and usually involves a small number of patients.

Elsewhere in the world, however, regulations governing stem-cell therapy are lax and usually poorly enforced.

In Russia, the Federal Health Inspection Service must approve a clinic’s use of stem-cell therapy. Several years ago, Russian authorities shut down more than 30 medical institutions illegally carrying out stem-cell treatments, but numerous clinics continue to sell the injections under the radar of regulators.

A Moscow clinic called Beauty Plaza has the government’s permission to carry out adult stem-cell injections within the framework of clinical trials. The stem cells are taken from the patient’s fatty tissue. Usually, subjects of clinical trials do not pay for their treatments, but Beauty Plaza clients have to pay for theirs, says the clinic’s director, Alexander Teplyashin.

“We can eradicate atherosclerosis symptoms, and we can cure diabetes Type 2,” Teplyashin said confidently during an interview at his clinic. “After the treatments, patients stop getting the flu. … They become more energetic, more active.”

According to its Web site, NeuroVita has governmental approval to offer adult stem-cell therapy to neurological patients. The clinic’s director, Andrei Bryukhovetsky, said NeuroVita has used stem-cell treatments on 200 patients since 2002, 70 percent of them foreign citizens and at least 30 patients from the United States.

Bryukhovetsky touts results that most experts would label as doubtful: A young man from Siberia paralyzed from the neck down now “eats on his own, drinks tea, all within a year.” For another patient with a spinal-cord injury in his neck, “one injection was enough. After one day he began writing,” Bryukhovetsky said.

“How can we explain it? I don’t know,” Bryukhovetsky said. “But it works.”

The trouble with such anecdotal evidence, said Evan Snyder, a U.S. expert on stem-cell research, is that it lacks credibility. And the best Environment to ensure that credibility, Snyder said, is a “proper, well-controlled clinical trial.”

“Anecdotal evidence doesn’t mean anything to me,” said Snyder, a stem-cell researcher at the Burnham Institute in La Jolla, Calif. “I’m happy for the patient if he feels better. But one has to be cautious about what to attribute that improvement to.”

“It could be a situation where the stem cells go to the wrong place in the body, or they are the wrong type of cells for a given region,” he said. “They could turn into cancer themselves, or cause neighboring cells to become cancerous.”

It remains unclear when stem-cell technology will be ready for broader application in U.S. health care. Patients like Martin say they don’t want to wait.

On a recent afternoon in a physical-therapy room at NeuroVita, Martin demonstrated what he believed was progress attributable to the stem-cell injections he received in his spine. He winced slightly as his hands, fastened to weight machine handles with leather straps, pulled back to lift 55 pounds. Before the treatments, he could lift just 2 pounds, he said.

Martin, manager of an automotive component plant before the accident, spent $33,000 on an initial visit, for an overall cost of about $81,000 on five visits to NeuroVita since June 2007.

He believes he’ll need one more year of treatments.

“If someone has the wherewithal to do something like that and it improves their psychological well-being, I wouldn’t prevent them from doing it,” said, Snyder the stem-cell researcher, “as long as they recognized that the likelihood for improvement is minimal.”