A Helmet to Prevent Paralysis 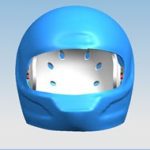 Engineers are designing a helmet that could protect the spine from serious injury.

Helmets for everything from football and hockey to motorcycle riding are built to protect the head from impact. Each successive generation of design is better at dissipating force and protecting against concussions and other knocks to the skull. But current helmets can still do little to prevent the spinal injuries that cause paralysis.

Now researchers at the University of British Columbia in Vancouver are working on a design that could protect the spine during a head-on collision. When a person’s head hits a flat object straight on, the impact normally causes the neck to crumple as it absorbs the brunt of the force. If a broken vertebra dissects or otherwise damages the delicate spinal cord, the result can be permanent paralysis. If the head hits an object at an angle, it can glance off without much damage–that’s why football players are taught to tackle opponents with their heads raised.

“I became interested in whether there was a way to convert the impact against a flat object into an impact against an angled object,” says Peter Cripton, the mechanical engineer and biomechanics specialist at UBC who led the project. He and his colleagues developed the “Pro-Neck-Tor” helmet, which consists of an outer shell that looks like most helmets on the market today, a rotating inner shell that hugs the head, and a mechanism that connects the two.

“The main purpose of helmets, whether in sports or transportation, is always to prevent brain injuries. We’re trying to do something quite different,” Cripton says. “We’re working toward a helmet with the same ability to prevent concussion, but also with the ability to prevent neck injuries.” During normal, day-to-day use, the inner shell remains immobile. But when the helmet hits something with enough force, the inner mechanism releases, and the inner shell rotates, guiding the head as if it were hitting an angled surface instead of a flat one.

“Just putting more padding on your head isn’t going to solve the neck injury problem, and it may even make it worse,” says injury biomechanics expert John Melvin, an adjunct professor at Wayne State University in Michigan who’s been studying the problem since 1968. “It’s a tough problem, but they’re taking a unique approach, and I think it has potential. It’ll have to be evaluated in many, many ways to make sure it’s safe–you don’t want to end up causing serious brain injury while preventing a serious neck injury.”

Revamping helmets is a tricky business, especially when there’s no good way to field-test them without living, breathing human beings. (Crash test dummies won’t work, and cadavers don’t have the necessary neck strength and position.) But in simulation testing, 3-D prototypes of the helmets reduced force to the neck by about 50 percent. Once the researchers perfect the design, they’ll individualize the helmets for different sports–football, hockey, and bicycling, for instance, which tend to result in different kinds of impacts.

The Pro-Neck-Tor project just received $150,000 in a new round of funding from the Canadian Institutes of Health Research to help enable commercialization of the technology. Cripton and his colleagues hope to have a helmet ready for market in about three years.

Facebook
Twitter
Email
Mix
Digg
Previous article
Determined To Make a Difference
Next article
From his toes, a message of hope