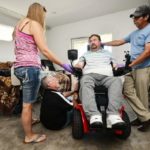 Nels Hadden may not be able to move his arms or legs, but he can still take down a deer with a crossbow.

There’s no magic spell or use of the Force, just the power of technology that lets quadriplegic men and women do things that would have been impossible years ago.

Hadden was paralyzed from the neck down in 2009, when he stopped to help at the scene of a crash on Interstate 84 and was struck by another car that slid out of control on the ice. He lived in Milton-Freewater at the time and has since moved to Walla Walla.

On Tuesday the nonprofit Independence Fund gifted Hadden an upgraded wheelchair with 16-inch pneumatic wheels and four wheel drive that will allow him to roll across uneven terrain. He can’t wait to use it to hit the beach for the first time in more than eight years.

“This is going to give some of those things back that were taken away from me,” he said.

Hadden has always been able to move about and control a cell phone using puffs and sips of air into a straw near his mouth, but his other chairs have always been designed for flat, even surfaces.

One of the biggest things the all-terrain chair will help with is hunting. Hadden was an avid hunter before the accident, and still is today. He may not be able to hug his children or lift a spoon to his mouth, but a Walla Walla man named Gary Parson helped him obtain a contraption that mounts a rifle, shotgun or crossbow on his wheelchair and allows him to sight it and pull the trigger using puffs of air from his mouth.

He has been hunting in the years since, and has a few sets of antlers at home to show for it. In the past, he has had to more or less park his wheelchair in one spot and hope the right animal wandered past. Now he’ll be able to move through the forest with other hunters in a manner more reminiscent of when he was a younger.

“I grew up in Pilot Rock and my family, that’s just something that we did,” he said. “It’s not just about taking an animal, it’s about getting together and joking and laughing.”

Even when he was stuck sitting in a blind not too far from the wheelchair-accessible van, Hadden has had some adventures. One night he and his nurse Miranda Amwoka were sitting in the blind when a mama bear and her two cubs walked by. The mama bear came up against the side of the blind, stuck her head in and looked right in at the two of them. Since Hadden was strapped to a wheelchair and Amwoka didn’t have a weapon, it was a pretty scary experience for both of them.

Nels’ wife Betsy said he has more Twitter followers than anyone in the family after he gathered a fan club of hunters and hunting companies interested in his exploits. A couple of them even sent free game cameras for him to review. He has more than 40,000 game camera photos saved on his computer.

Betsy was the one who found out about the Independence Fund, a nonprofit that gives all-terrain wheelchairs and other tools to veterans injured in combat so that they can resume more of the outdoor activities they enjoyed before their injuries. Hadden wasn’t injured in combat, but he is a veteran who served nine years active duty and he was injured while acting as a Good Samaritan, so Betsy convinced him to take a shot at applying anyway. He received a letter saying that usually he would not be eligible, but there was a veteran in the area who had recently given one back because he only got to use it a couple of times before he fell too ill. The group was willing to give Hadden the used chair for free.

It wasn’t a simple matter of moving the chair from one part of Oregon to another. Each chair for a quadriplegic user must fit them “like a glove” in order to avoid pressure sores, and Hadden has even more needs because of the extent of the injuries he suffered during the accident. The chair was sent to a factory where it was customized to Hadden’s measurements and needs, but when Pete Hedberg of Pacific Healthcare Associates delivered it on Tuesday it still took an hour and a half of small adjustments before Hadden was lifted into it using a sling attached to an apparatus on the ceiling. Then it was another hour of adjustments aided by a tape measure to make sure his arms were resting at equal height.

“It takes longer than normal to sit him because he had so many bones broken,” Betsy said.

Still, Hadden was excited about the long-awaited chair, which resembles a shiny red miniature ATV on the bottom.

“Wow, she’s purdy,” he drawled as he laid eyes on the chair. “Pretty fancy.”

He commented on the lights and turn signals on the chair, joking, “Wal-Mart, here we come!”

Hadden doesn’t know the exact value of his new chair, but he does know that the less-fancy one he has been using cost $40,000. Buying a new wheelchair would have cost him more than buying a new car, he said. He can’t even begin to express how grateful he is to receive one for free.

“You rely on it every day because without it you’re in bed,” he said. “It’s basically like an arm or a leg.”

For more information about the Independence Fund, visit independencefund.org.