Dan says, ‘Whether it’s motocross or hill climbs or dirt drags I just like being at the track.’

Dan Baird is in town competing at the Jackpine Gypsies hill climb.

Dave says, ‘He was racing motocross on a pw50 at like three and a half.’

Like many motocross athletes, he started at a young age.

Dave says, ‘I don’t know if they have to be four or five to do the AMA, but I lied for a year and a half, and then I had to go back a year and a half later and tell them, ‘no, he’s only five. He’s not really seven.”

He was dominating the hill climb… but 5 years ago his dreams stalled out.

Dave says, ‘We were done racing, and they took a gainer down the hill to pick up our lawn chairs and coolers and stuff. It tipped over on the driveway on the way down, and rolled over and hit him twice.’

Dan says, ‘I broke my C7 vertebrate, and it made me quadriplegic. Well a bunch of other stuff, it broke my back and a ruptured spleen and stuff, but that was the worst.’

After your accident, did you think you were going to race again? Dan says, ‘No, I’ll tell you, no.’
Dan says, ‘Imagine having the thing you love the most in life, and you can’t do it anymore.’

But, Danny wasn’t going to settle for that –

Dave says, ‘There’s no quitting him whatsoever. That’s not an option.’
– He was determined to ride again. And a few months ago, Danny became the first quadriplegic to compete in motocross.

Dan says, ‘You’ve got to put all the bad thoughts out of your brain and just, I don’t know, I don’t know how to explain it.’
Dan says, ‘Being back on a bike I forget I’m crippled while I’m riding.’

But obviously, there are plenty of challenges. 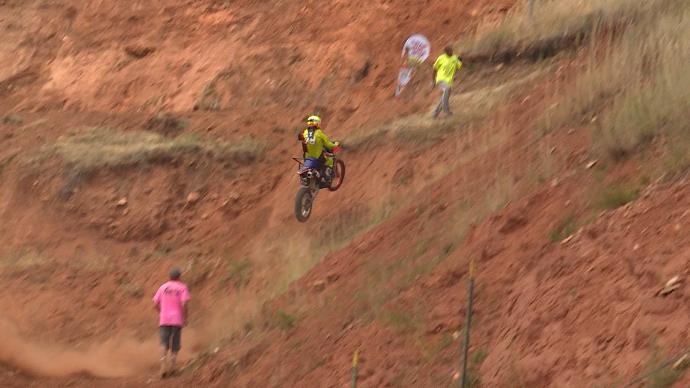 Dan says, ‘You know, you start tilting one way you put your foot out, and obviously I can’t.’
Dave says, ‘He’s paralyzed from the armpits down. He has no abdomen muscles or anything. He has just his arms and that’s it.’

Dan says, ‘I’m more focused now on riding my bike than I ever was beforehand. I can say that. It’s all I want to do.’

He has his arms, his determination, and his dad.

Dan says, ‘My dad is by far the biggest – man, I get all choked up – my dad is the main reason I’m here. Money, mechanic-wise, he’s like a 15-man pit crew wrapped into one person.’

Daniel surprised everyone by getting back on a bike…

Dan says, ‘Don’t let anyone tell you that you can’t do something, because as long as you know you can in your head and in your heart, you can do it. And that’s the truth, because I had people telling me that I couldn’t ride a bike for a long time, and I kind of believed them until I got on one. I started putting around the yard, and within five minutes I was ripping down the road doing wheelies.’

He is proof that anything is possible if you want it bad enough. Congratulations to Danny Baird for being this week’s Powerade Athlete of the Week. For Black Hills Fox sports, I’m Taylor Kauffman.

Volunteers help improve the quality of life of people with spinal...