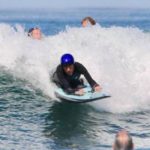 With sunburnt cheeks and scabbed-over nose, Jay Liesener’s face tells it all. His recent trip to surf California’s southern coast was a success.

That’s a good sunburn, said Liesener with his head-wide smile as his wife, Melanie, helped him get out of their van.

Liesener is a quadriplegic and adaptive surfer who lives in Milton. When Gazette readers last saw him, it was days after a crowd-funding effort had raised more than $15,000 to send him and his team, Team Surfgimp, on a bucket-list-checking surfing trip to southern California.

Four days removed and still jet-lagged, the Lieseners had a glow about them that suggested the trip was as gratifying as they hoped it would be.

It was awesome, said Liesener.

“The waves are so much better,” he said before geeking out on wave differences between the East and West coasts. “There was more force behind these waves, so I was able to lean into them more and make turns.”

For the team of nearly two dozen people who went out to help, Liesener said new waves meant a new approach. Instead of being evenly spread out from swell to whitewater, team members were clustered near the start area and end, with a person on a board riding next to him for the duration of the wave. There was so much flat water between waves, that a wave could be ridden forever, said Liesener.

“There were nice, clean lines coming in. It was beautiful,” he said.

Things weren’t all peaches and cream during the adventure. Immediately following the flight out to California, Liesener’s body went into shock and there were real concerns it would affect the rest of the trip.

“It didn’t help that I was worried I was going to ruin the trip for everybody else,” he said. “We had all that support to get out here. I wanted the trip to live up to everybody’s expectations. I had put this burden on myself.”

Melanie said he had a 104-degree temperature and chills by the time the group was able to check into the condo that was rented. His teeth were ready to crack, she said.

“It was legit crisis mode. If something hadn’t changed, and quick, we were going to the emergency room,” she said. “It was really scary.”

Fortunately, marijuana is readily available in California. Liesener is a medical marijuana patient in Delaware, but his card doesn’t work in California. Through the work of friends and family, he was able to procure some medicine. After the first hit from a newly purchased vaporizer, he was able to unclench and relax. Things turned out OK, but the four-hour episode was so tiring he cancelled surfing the next day.

Liesener rebounded well and was able to get into the water four of the five remaining days.

As seems to happen during soul-finding adventures, the cosmic winds rolled over Liesener and the team when surfing great Rob Machado crossed their paths during a lunch run midway through the trip.

Liesener was inspired to try surfing 10 years ago after watching a surfing documentary about quadriplegic surfer and Life Rolls On founder Jesse Billauer. Machado is Billauer’s childhood friend and the able-bodied surfer Billauer first called when he wanted to get back out in the water a few years after his injury.

“He was more than gracious with his time,” said Liesener.

A decade later for Liesener, but on the same surf that Billauer and Machado rode, Liesener said he had the best rides of his life at Cardiff State Beach – immediately identifiable by the sky-blue lifeguard stands on concrete pillars next to the beachside cliffs.

“The waves set up so well there,” said Liesener of the area they went back to most of the trip.

Not quite as cosmic as meeting Machado, but amazing nonetheless, was the number of adaptive surfers the team randomly came across during the trip. It was great to be in an area where what the team was doing wasn’t unusual, said Liesener.

One of the biggest honors during the trip, Liesener said, was being asked by one of the adaptive surfers to go compete in Hawaii at an adaptive surfing competition.

Real life was calling, so the team came home, but Liesener said he appreciated the invite.

The other surfers were amazing, but they weren’t giving easy waves, Liesener said. The team earned being out there in the water, Liesener said, his face with the scars to prove it.