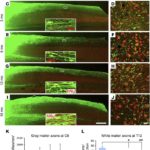 The findings are published in the September issue of the Journal of Clinical Investigation.

“The NSCs retained an intrinsic human rate of maturation despite being placed in a traumatic rodent environment,” said Paul Lu, PhD, associate professor of neurosciences and lead author of the study. “That’s a finding of great importance in planning for human clinical trials.”

Neural stem cells differentiate into neurons and glia or support cells. Researchers like Lu and colleague, Mark Tuszynski, MD, PhD, professor of neuroscience and director of the UC San Diego Translational Neuroscience Institute, have explored their potential as a sort of patch and remedy for spinal cord injuries, implanting NSCs derived from induced pluripotent stem cells into animal models of spinal cord injuries to repair damage. In previously published animal studies, Lu and Tuszynski have shown NSCs can survive implantation and make new connections, even beginning to restore limited physical function, such as foot movement, that had been lost to paralyzing injury.

But major questions remained: At what rate do the NSCs mature? And for how long? Rat biology works at a much faster pace than human. The gestational period for a human is 280 days; for a rat, it’s 21. The brain of a 2- or 3-year-old human child is comparable in body/brain weight ratios to a 20-day-old rat. It was possible that human NSCs in animal models would not accurately reflect functioning in future human patients.

“Most NSC grafting studies have been short-term, measuring survival times in weeks to a few months,” said Tuszynski. “That’s not enough time to fully measure the growth and maturation rate of human NSCs or what changes might occur farther out from the original grafting. These are important considerations, not just for the basic science of stem cell biology, but for the practical design of translational human trials using NSCs for spinal cord injuries. We need to better understand the long-term nature and time course so that we can accurately assess results and success.”

Lu and colleagues used the widely available, well-characterized H9 human NSC line derived from human embryonic stem cells. The H9 NSCs were modified to express green fluorescent protein and embedded in fibrin matrices containing a growth factor cocktail. The matrices were then transplanted into spinal cord lesions of immunodeficient rats two weeks after injury, which had impaired functioning of the forelimb. Control rats underwent a similar process, but without the NSCs.

The scientists then monitored growth and development of the implanted grafts over time, noting significant early, unrefined growth followed by the appearance of markers indicating maturing nerve cells after several months. As the grafts aged, the cells continued to display gradual, normal development processes, including natural pruning and redistribution to focus development on fewer but more mature cells.

“To our surprise, we found evidence of continued stem cell maturation throughout the period,” said Lu. “It was clear that these neural stem cells retained their intrinsic maturation programs despite a prolonged presence in a challenging environment. The recovery of forelimb function in the rats supports the basic therapeutic idea, but importantly, improvement occurred only after mature cell markers of both neuronal and glial lineages were expressed.”

The lengthy study reported other findings of note: Implanted NSCs did not migrate from their lesion sites, but supportive astrocytes did, a potential safety concern. However, the scientists did not observe any adverse effects from glial outgrowth, such as tumor formation or deterioration of forelimb function over time. Tuszynski said modified grafting procedures could minimize cell leakage.

“The bottom line is that clinical outcome measures for future trials need to be focused on long time points after grafting,” said Tuszynski. “Reliance on short time points for primary outcome measures may produce misleadingly negative interpretation of results. We need to take into account the prolonged developmental biology of neural stem cells. Success, it would seem, will take time.”

Funding for this research came, in part, from the Veterans Administration, the National Institutes of Health (NS09881, EB014986), the Craig H. Neilsen Foundation, the California Institute for Regenerative Medicine, the Dr. Miriam and Sheldon G. Adelson Medical Research Foundation and the Bernard and Anne Spitzer Charitable Trust.