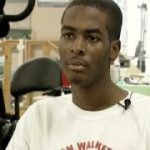 Injured Football Players Inspired By One Another

by WAPT.com – JACKSON, Miss. — A Murrah High School football player is drawing inspiration from a kindred spirit, weeks after suffering a paralyzing injury on the field.

A spinal cord injury during an Aug. 23 scrimmage at Murrah left Lawerance Williams, 17, unable to move his body below the upper chest.

“He’s a cool dude, with a good personality,” McCray said about Williams.

Dr. Alyson Jones said that the bond between the two teens is helping them cope with the new reality of their lives.

“I think it’s really beneficial for both of them to be here where they can identify with each other,” Jones said.

Doctors are focusing on building strength in Williams’ upper body because he has muscle ability all the way up from about his upper chest.

Williams said that even though he’s in the hospital, he’s keeping up with his team’s football season.

“You can’t really get down when you have a lot of people around you being positive,” Williams said. “It helps me stay positive.”

McCray has the same hopeful outlook.

“I plan on doing everything,” McCray said. “I plan on getting back on the field if I can.”

Williams’ mother said that the huge outpouring of support has helped her stay strong.

“It only gets tiring when I see him getting tired,” Selena Williams said. “I’m fine otherwise because my job is to keep him up.”

Doctors said that Williams should be able to leave the hospital in about a week.