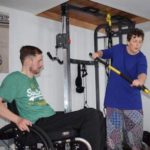 A Dublin man has described his “nightmare holiday” after he was left paralysed in a freak accident while in Spain with his family.

Rob O’Byrne (29) from Co Dublin was drinking by the pool with his family when he jumped into the shallow end of the pool.

“We were sitting by the pool and someone mentioned going for an impromptu swim, so I took off my shirt and dived into the pool. That fateful decision would change my life forever. I didn’t know that the water was shallow. I hit my head at the bottom and knocked myself out,” Rob told Independent.ie.

The then 17-year-old was left unconscious after the accident and strangers jumped into the pool to save him from drowning.

“I never got to thank the stranger who saved my life.

“When I woke up at the side of the pool the real nightmare began. I was put into a wheelchair and brought up to my room, lifted on to the bed and a doctor was called. He examined me and told me the reason I couldn’t move from the neck down was because my body was in shock from the cold water, I would be okay in the morning but I should come down to the clinic the following day.

“As I lay on my bed for the next couple of hours, I didn’t improve. My father became seriously worried and called an ambulance. When the paramedics arrived they examined me and immediately put me onto a spinal board and in a neck brace. I was brought to a Spanish hospital.”

In hospital, Rob was given the devastating news that he was paralysed.

“I had damaged my spinal cord and was left a C5 incomplete quadriplegic – I was able to speak and breathe on my own but I was paralysed from my chest down. I had no leg or hand function.

“I went from being an outgoing teenager to facing the prospect of never being able to walk for the rest of my life. I spent a week in intensive care in the Spanish hospital and was flown back to the Mater Hospital spinal unit. Five weeks later, I discovered I would never walk again.”

The Leaving Cert student said he was “inconsolable” and feared that he would never have a “normal” life.

“It was a long nine months but from the very start of my rehab I decided to be positive. I knew there were people in the hospital in worse situations than me. I was grateful that I wasn’t paralysed from the neck down.

After being released from hospital in 2006, Rob returned to school to do his Leaving Cert.

“It wasn’t easy – I did the two-year course in one – and passed. After school, I attended Inchicore College of Further Education and did a Fetac Level 5 business management course. From there I went on to the Institute of Technology, Tallaght and spent the next four years studying for my honours degree in business management.”

After completing his studies, he became the first person in Ireland to undergo a tendon transfer and was able to move his arm muscles again.

“When I saw a slight flicker in my triceps I realised the last four month had all been worth it.”

When Rob left rehab, he went to a commercial gym to get active, but he said personal trainers didn’t understand the rehabilitation I’d been through.

“I looked into different forms of exercises and found TRX (Total Resistance Training). I started with a personal trainer and we messed around with the equipment until we found a routine that worked. It ended up opening my eyes to different ways people in wheelchairs, those with brain injuries, stroke injuries and the blind, can exercise. It inspired me to try find a way to get the word out there.”

Rob decided to focus on the future and he went back to college to train as a gym instructor and personal trainer.

He then built a small home gym, which was wheelchair accessible, and set up his own business.

” I want to give people with disabilities access to a personal trainer – someone who understands where they are coming from and who understands their needs, to give them the one-on-one attention they need.”

Earlier this year, Rob became a viral sensation after crowdsurfing at a Coldplay concert in Croke Park.

“I never imagined I’d end up on the shoulders of strangers, crowd-surfing my way to the stage and ultimately performing with Chris Martin, or that the clip would go viral.”

“In the press release for the event they called me a “Coldplay hero” and fitness ambassador. I’m not sure how much of a hero I am but I like the idea of being a fitness ambassador, and I hope that this little gym of mine grows into something special.”

Rob would like to hear from the people who saved his life. If you remember him, you can contact him on whatsyourexcusefitness1@gmail.com or go to the What’s Your Excuse Facebook page.

SII is also asking people to donate on the day via their mobile phones by texting ‘CORD’ to 50300 to donate €4.