Family, friends rally to help chef fight back from injury

Family, friends rally to help chef fight back from injury 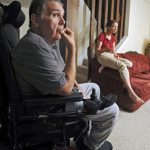 It happened in an instant. Dave Hartung was driving home from work the day after Christmas when a car darted from the shoulder of Interstate 97 and across two lanes to reach a ramp to U.S. 50.

The vehicle smashed his car. While describing the crash to state troopers, Hartung now realizes, he was in shock. He went home to Severn and only in a few hours did he realize he was in pain, he said.

At the hospital, doctors found that the accident had crushed four Vertebrae in Hartung’s spine and partially severed his spinal cord. Hartung has been in a motorized wheelchair since January. He has been able to eat food since April, but only if it has been pureed.

“It’s a cruel irony for a chef,” Hartung said.

It has been even more disheartening for someone who had his dream job as one of three chefs for the governor of Maryland. His wife, Beth Hartung, had to quit her job as manager of the Rockfish Raw Bar & Grill in Annapolis to care for him and their two young children.

To help pay for Hartung’s mounting medical bills, family and friends from the Annapolis restaurant community are holding a chowder bash Sunday at Herrington Harbour Marina Resort in Rose Haven.

Gov. Martin O’Malley will not be able to make the chowder bash because he will be traveling to the Democratic National Convention in Denver, but first lady Katie O’Malley plans to attend, said Samantha Davis, her chief of staff.

Hartung, 49, was raised in a family of fine cooks. After high school, he decided to pursue a cooking career and graduated from the Baltimore International College in 1980. He spent about 20 years as a chef in several Annapolis-area restaurants. He had moved into restaurant consulting by early 2002 when he applied for the job at Government House.

Hartung was hired in May 2002 to cook for former Democratic Gov. Parris N. Glendening. Seven months later, Hartung had the honor of cooking for a childhood friend, newly elected Republican Gov. Robert L. Ehrlich. Hartung stayed on when O’Malley won the governorship.

Hartung relished the job. He concocted a recipe for a quarter-pound chocolate chip cookie nicknamed “bombers” by the state troopers who scooped them up in between shifts protecting the governor.

He made time for charity cook-offs and events such as the Maryland Seafood Festival. One of his dishes, Scallops Tequila – sautéed scallops in a Tequila and cream reduction – became a crowd favorite.

He underwent a double-knee replacement in 2006, but recovered well, Beth Hartung said. Dave Hartung was just realizing the benefits of his new knees when the accident happened.

This sort of accident is not uncommon at the U.S. 50/I-97 split, state police told Hartung. Drivers who miss the fork to U.S. 50 often pull off to the I-97 side to try to correct their mistake by cutting across I-97 at a 90-degree angle.

Hartung sought out his family doctor the next day, when he felt weakness in his left side. After more tests, doctors found out the extent of his injuries. He took it easy at home while he awaited surgery Jan. 14. Although he walked into surgery, he was unable to walk out.

Surgeons believe his spinal cord relaxed during surgery to fuse his four damaged vertebrae. They thought the operation was a success until Hartung woke up and couldn’t move his legs. One of his vocal cords was paralyzed, which left him unable to drink or eat. Doctors had to perform a tracheotomy to make sure he could breathe.

During his five-month stay at two hospitals, Hartung contracted pneumonia twice and had a pulmonary embolism. He came home May 5 but then returned to the hospital nearly two weeks later with pneumonia and a blood and bladder infection. Home again, he has gradually improved.

Family and friends have struggled to find ways to help. Neighbors installed a wheelchair ramp in the back yard and a metal bar in his home so that he can practice standing. Hartung’s mother-in-law watched the kids and cleaned the house. Friends have come to visit, but they wanted to do more, said Pat Ernst, a former chef who befriended Hartung about 20 years ago.

Ernst had discussed doing annual benefits with friend Anna Chaney Willman, owner of Herrington on the Bay Catering. The idea didn’t take shape until after Hartung’s accident. The two decided to do a chowder cook-off. Twenty restaurants will compete to make the best chowder.

Although only 60 tickets have been sold, Ernst expects a crowd of more than 600 people to buy tickets at the door Sunday.

Restaurants eagerly jumped on board to help the chef who always lent a hand for a good cause, Ernst said. He thinks it will boost Hartung’s spirits to see all of his former cooking colleagues.

“I love the idea that everybody is willing to jump in and help one of their own,” Ernst said.

Hartung has tried to maintain a good attitude, although he acknowledges bad days. He said he misses cooking.

“I could be bitter, angry or upset all the time, but that’s not going to do anybody any good,” he said.

Besides, the accident finally has gotten him to make changes that his doctors had been nagging him about for years: quit smoking, lose 30 pounds and start exercising.

Hartung uses small arm weights every day to boost his strength. He still has trouble on his left side. His left arm is too weak for him to push a manual wheelchair. He can shuffle with his right leg, but his left leg does not move well. With more Physical Therapy, he believes he will be able to walk again.

“The support I’ve gotten has just been beyond belief,” Hartung said. “I’m a very lucky guy to have such a great support system.”

By Susan Gvozdas – Special to The Sun