A new robotic treatment device helping people with spinal cord injuries learn to walk again can only be found in one place in the United States; Brooks Rehabilitation in Jacksonville.

JACKSONVILLE, Fla. – A new robotic treatment device helping people with spinal cord injuries learn how to walk again can only be found in one place in the United States: Brooks Rehabilitation in Jacksonville.

The Hybrid Assistive Limb, or HAL, is fitted to a person’s limbs and midsection and controlled using signals from the brain.

“The robot then perceives that signal and is able to carry out a person’s intended movements,” said Dr. Geneva Tonuzi, medical director for the Brooks Cybernic Treatment Center and the Spinal Cord Injury Program.

HAL has been available in other countries, but Tonuzi said it was only cleared by the FDA in December 2017. The robot at Brooks Rehab is the first in the United States.

The goal is to build up enough strength so the person eventually no longer needs the assistance of the robotic exoskeleton.

“Over time, a person is able to generate more of their impulses through their signals that are building and the robot gives less and less,” Tonuzi said.

Two men have already begun using HAL for treatment. Each use the robot for about an hour, five days a week, and will continue for about three months.

One of the men undergoing treatment is Maverick Moody. Moody, 26, was in an ATV crash more than two years ago. 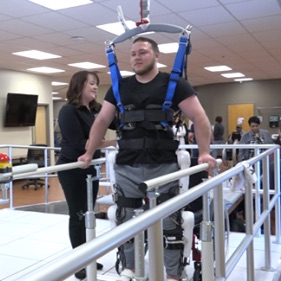 “I dislocated and crushed my T-11 vertebrae,” Moody said.

It was almost too much for Moody to comprehend at the time.

“It was absolutely devastating,” he said. “Your life as you know it pretty much seems like it’s over.”

Thanks to HAL, Moody has hope.

“Closest thing back to walking normally and independently on my own that I’ve experienced since I began this journey,” he said.

Moody has been using HAL for three weeks and said he’s already seen improvement; from his stamina, to core strength, to respiratory improvements.

For now, it’s one step at a time. However, Moody is determined to someday walk again.

To learn more about HAL and the Brooks Cybernic Treatment Center, click here.