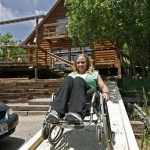 Four years ago, Maggie Anderson’s spine was crushed when the minivan she was riding in hit black ice, flipped and landed on her.

Anderson will forever regret not strapping on a seat belt that day in Idaho. But at 21, she’s found joy in life, good friends and even a chance of escaping her wheelchair.

Hope first came days after the crash, when she realized she could roll over. Three years later, after intensive daily therapy, Anderson’s right leg moved.

Anderson is a community college student in Solana Beach, Calif., near an innovative spinal cord Rehabilitation clinic. She also balances a part-time job and a boyfriend in a life that she calls “happy.”

The blond, blue-eyed woman moved to California from her mother’s home at the top of Emigration Canyon to be near the rehabilitation clinic.

Spinal cord injuries used to be considered hopeless because neurological cells are known to stop dividing and growing in adults. But new clinical techniques are showing that other cells may try to find connections between the brain and appendages in some injured patients.

Technology that mapped the human genome is assisting in the research by identifying exact proteins in various parts of the body. Scientists also are discovering that walking is not completely controlled by the brain, according to research published by the National Institutes of Health. Muscles in the legs and back can be trained to function at limited capacity without brain input.

One of the newest techniques Anderson uses is called locomotor therapy. Her weight is supported in a harness over a treadmill as trainers force her legs and feet to move as if she were walking.

Anderson has some feeling in her left leg and none in her right but says she hasn’t forgotten how to walk. By focusing on specific muscles for long periods of time, she can get them to move, she said.

“I can’t feel this leg, but I can flex it,” she said, lifting her toe about a foot off the floor. “I just believe in myself so much.”

If she doesn’t work both legs daily, Anderson’s condition worsens, she said. But she plans to keep working every day.

“If I spend every day of the rest of my life trying and never did, that would be OK, because at least I tried,” she said.

About 50 spinal cord injury patients in Utah are being treated in the Neuroworx clinic in South Jordan. There, physical therapists use locomotor therapy, as well as water therapy and a technique where the patient sits on a bicycle and electrodes attached to his or her legs fire in the proper sequence.

“Nobody really knows the Plasticity potential of the spinal cord,” said director Jan Black, who holds a master’s degree in Physical Therapy.

Black, like Anderson, advocates daily exercise for injured patients so they can have as much Functional capacity as possible.

Much of the credit for improvements in spinal cord rehabilitation should go to emergency medical responders, she said. Improved techniques in emergency rooms and intensive care units are allowing patients to escape paralysis through quick surgery. Many spinal cord patients are now left with at least some function, she said.

Anderson hopes to finish her studies in human development and then become a guidance counselor and inspirational speaker.

“Some people, they break their backs and it breaks them,” Anderson said. “But for me, it woke me up. I love to help people find their happiness again.”

Anderson wants to talk to students of all ages about interacting with people who have disabilities. She would suggest that people in the general population ask people with disabilities why they have to use equipment like wheelchairs or voiceboxes, she said.

When not working, studying or in therapy, Anderson raises money for her therapy, which her insurance policy doesn’t cover. Monthly treatments cost about $2,000.