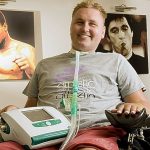 Matt Hampson might well have been in Auckland this summer, playing for the England rugby team as they took on New Zealand. After all, many of his former team-mates were.

But Matt was instead at home in Rutland, confined to a wheelchair, paralysed from the neck down, unable to move any part of his body save for his head, his breathing dependent on a Ventilator.

The horrific accident that transformed Matt’s life happened nearly three years ago when, while training with his international colleagues in Northampton, the scrum collapsed and the former prop forward, who played for the Leicester Tigers and the England Under 21 side, suffered a dislocated neck and a trapped spinal cord.

It seemed to the outside world that his life had been destroyed. But they had failed to take into account this extraordinary man’s spirit.

He is not just hoping that stem-cell research may lead to reconstructing the sliver of his remaining spinal cord that, in turn, could improve his mobility; he is actively doing something about it, having founded the Matt Hampson Trust, which raises funds for his round-the-clock care, and heightens awareness for spinal injury research.

Matt is also patron of a new charity, Special Effect, which provides computer equipment for those extremely paralysed who can operate only with their eyes.

‘Hope helps, not despair,’ he says, from the barn that has been turned into his home at the side of his parents’ house.

His builder father, Phil, transformed the barn into an all-mod-cons home for his son, and the walls are adorned with signed sporting memorabilia from the likes of former England rugby captain Martin Johnson.

The first few weeks and months after the accident were hard going. The Stoke Mandeville Hospital seemed like a prison at first but, says Matt, he had a choice.

‘I either stayed on the floor or I got up and made the most of it. My family and friends made it clear to me that I had no option.’

Twice a week he undergoes physiotherapy. ‘I’m trying to keep myself as fit as possible, and this means having my body worked on as hard as I can. The good thing is that my physio treats me like an athlete, not an invalid.’

And then there is the stem-cell research that Matt’s hard work is helping to fund.

‘I am confident that one day I will have a far greater degree of mobility than I have now and this will be down to research and the fact that I still have a tiny portion of my spinal cord intact,’ he says. ‘That hope and expectation are crucial.
‘In fact, I feel lucky. I’ve discovered a great deal about myself and I’m able to do some fulfilling work. It’s not how I planned my life but I intend to make the most of it.’