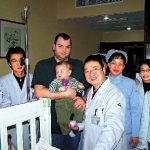 PHILADELPHIA — In February, Marcela DeVivo took her baby son to the Dominican Republic and paid $30,000 to have him injected with blood stem cells from aborted fetuses.

Nathan, who turns 2 next month, was born with the hemispheres of his brain fused. He is physically and mentally handicapped.

DeVivo is among a growing number of Americans spending up to $75,000 in the hope that clinics in developing countries have realized the dream of regenerative medicine: using stem cells to fix the so-far unfixable.

From Guatemala to Ukraine, dozens of stem cell purveyors are selling that dream over the Internet. They say they are helping patients whom mainstream medicine cannot. And they purport to treat a stunning list of illnesses, especially incurable conditions, such as Parkinson’s, cerebral palsy and paralysis.

Their Web sites, many loaded with patient testimonials, offer little or no scientific evidence to support their claims.

While no one knows exactly how big this new form of “medical tourism” has grown, it is booming. One of the biggest stem cell firms, Beike Biotech — whose slogan promises “tomorrow’s treatments today” — says it has treated 3,000 Chinese and foreign patients at its 24 hospital clinics in China.

Mainstream researchers condemn stem cell tourism as unethical and dangerous, if not fraudulent. They urge patients to wait for rigorous studies.

University, declared: “Let’s say these guys are making $20,000 per patient. They’re making hundreds of millions of dollars. They can’t take time to document it and publish it? This is the wrong way to do it.”

For many patients, the proper way — years of animal studies followed by arduous human testing — is too slow. They hope the experimental cells hit the right targets, like magic bullets, even if humans are shooting in the dark.

“I went to the Dominican Republic expecting a miracle,” DeVivo, of Valencia, wrote on her blog, prayfornathan.org. “Will he walk out of the clinic? Maybe he will say his first full, clear word. What will it be?”

A decade ago, when embryonic stem cells were first isolated, the controversial cells were thought to be the only ones that could give rise to all tissues in the body.

“Adult” stem cells, in contrast, were presumed to resupply only the specialized tissue — say, blood or fat — that harbored them.

But now, scientists can genetically reprogram specialized cells to be as versatile as embryonic ones — albeit only in the lab, with methods that would be unsafe in humans.

“There is a risk that patients who are desperate will misunderstand the amount of progress,” said Harvard University professor George Daley, associate director of the Stem Cell Program at Children’s Hospital Boston. “It is fertile ground for exploitation.”

Most stem cell purveyors claim to use blood stem cells. These cells — readily extracted from circulating blood, bone marrow, fetuses or umbilical cords — have been used since the 1960s to treat blood-system diseases, such as leukemia and lymphoma.

There is no evidence that a shot of blood stem cells can magically fix any problem in every organ system, experts say, but that’s what stem cell tourists are led to believe.

William Rader, a psychiatrist in Malibu, who owns the Dominican Republic clinic where Nathan was treated, says on his Web site that the fetal blood stem cell “searches out, detects and then attempts to repair any damage or deficiency discovered.”

Rader did not respond to requests for an interview.

In February, when he was 10 months old, the impact of his handicap was obvious as Physical Therapist Karen Conner worked with him at home. Justin couldn’t roll onto his belly, crawl or pull himself to a standing position.

“What are you doing, big boy?” cooed his mother, Lora, as Conner bounced Justin on a giant ball to strengthen his abdominal muscles.

The baby did not smile or laugh. He didn’t reach for toys, even ones with lights and sounds. He was easily startled. He recoiled at most objects put in his hands.

Fast-forward to April, two days after Justin’s first birthday — about a month after he and his parents flew home from Beike’s clinic in Hangzhou, China.

A reporter watched as Justin’s eyes followed a lighted ball that Conner moved in front of his face. He also pulled blinking balls out of a plastic jar, crawled to get toys, knelt, and pulled himself up using the sofa. He often smiled.

Jonathan Salvin, Justin’s ophthalmologist at Alfred I. du Pont Hospital for Children in Wilmington, Del., found no change in Justin’s optic nerves but called his ability to follow objects with his eyes “a pretty significant improvement.”

All Salvin could say for sure was that occasionally, vision gets better as the brain matures early in life.

“I have seen improvement like this in kids who haven’t had this protocol,” he said.

While the Lowerys can live with that ambiguity, researchers cannot.

“The unfortunate thing,” said John Steeves, a spinal-cord-injury researcher at the University of British Columbia, “is that none of us is learning anything that advances our scientific understanding.”

Many patients or families, including Justin’s, report neurological changes within 48 hours of receiving stem cells.

Believing is seeing, also known as the placebo effect.

No one wants to feel bilked, especially after fundraisers and loans.

“The problem with folks who say, ‘Things are a little better’ is that they’ve just spent a lot of time and money,” said Bruce Dobkin, a neurologist and Rehabilitation expert at the University of California-Los Angeles. “And they think, ‘Maybe I’ll continue to get better.'”

Six years ago, Tim Case, a workaholic New York real estate developer, was talked into trying an all-terrain vehicle, just for fun, by his 11-year-old son.

Case crashed into a tree and, in a heartbeat, ended his life as an alpha male.

Although Case, 48, is a quadriplegic, he is not as disabled as actor Christopher Reeve — who became a friend after the accident — was before he died. Case doesn’t need a Ventilator, and has limited use of his arms and hands.

Case, however, has a problem Reeve didn’t have: unrelenting, excruciating pain.

Case believes the pain — which was intermittent and tolerable after the accident — was exacerbated by the cell transplant he received in 2003 from neurosurgeon Huang Hongyun in Beijing.

“I think it’s just as important to report the negative as the positive,” Case said last month from a wheelchair in his Long Island home.

Doctors used to dismiss such pain as imaginary. After all, how can a limb that can’t feel a pinprick feel pain? It is now clear that broken nerves can send dysfunctional signals to the brain.

As Case can attest, these signals can defy pain drugs, including opiates.

Early last year, he wrote: “There has to be an efficient way to end my life. Some way to end the pain.”

Has it lessened since then?

“As I tell my wife,” he said with a sad smile, “the only thing that seems to change is my ability to tolerate more pain.”

Still, he insisted the treatment had been worth the risk. He would try a newer version if he thought it would help.

“We’re desperate,” he said. “There’s nothing else.”

That, Huang and other purveyors say, is why cells should be used even though it is not clear how they work.

“It is more reasonable and respectful to the patients,” Huang e-mailed last month. “Any standard should consider patients as the key factor.”

Huang worked at Rutgers for three years under Young’s tutelage, surgically implanting specialized cells into rats with spinal injuries. While these cells are not stem cells, they are believed to be key to the olfactory (smell) system’s ability to replenish nerves — something no other part of the nervous system can do.

In 2002, Huang returned to Beijing and began offering the rat operation to humans. He said that on the standard neurological-Impairment scale, patients had gained at least one grade of Motor function — such as extending a formerly paralyzed wrist. Soon he expanded the treatment to other problems, such as stroke and amyotrophic lateral sclerosis. He also traveled widely, talking up his methods to Western scientists.

Young, who was born in Hong Kong, has urged his former protege to conduct controlled studies, called clinical trials — as Young plans to do late this year with doctors he has trained in China.

Huang “is delivering a treatment that he believes is effective,” Young said. “But I have strongly discouraged him. The Chinese government dislikes it.”

Huang insisted that officials did not object to his procedure, which he called safe.

For another view, UCLA’s Dobkin and two colleagues found seven patients who planned to get Huang’s cell transplants for spinal-cord injuries. The Western doctors examined the patients before, after and up to a year later.

Their tiny study, published in 2006 in Neurorehabilitation and Neural Repair, found that five of the seven patients had serious side effects, including pneumonia, bleeding and meningitis.

None had significant improvements.

By MARIE MCCULLOUGH
The Philadelphia Inquirer

‘The injury doesn’t change who you are,’ says Coquitlam man