Turlock man back to defend gold at wheelchair games 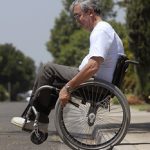 Three weeks after the auto accident, Joe Velasquez remained in his hospital bed in Pocatello, Idaho. His neck was broken, his spinal cord severely damaged, and he was connected to a respirator, unable to move.

It was no way to spend the Christmas season of 1983, not with a wife and two children at home.

One morning, Velasquez became aware of two doctors at the foot of his bed discussing his condition.

“They didn’t know I could hear them, but they were saying to each other that I was going to be that way for the rest of my life,” Velasquez said. “I couldn’t move, but I could hear them. My brain was sharp. If I could have jumped out of bed and pulled the plug on my respirator right then, I would have.”

Fast-forward to July 2007. Velasquez, now a Turlock resident, had just ended another strong showing at the Veterans Administration National Wheelchair Games in Milwaukee. Competing for the 20th time, he picked up another five gold medals — two swimming events, billiards, the wheelchair slalom and table tennis — winning every event he entered, and was sitting with his family at the closing ceremony.

Velasquez heard his name called. He looked at his wife, Teresa, in disbelief, and they shared a hug before he wheeled himself to the front of the room.

In a vote of the 500 competitors, plus organizers and volunteers, Velasquez was selected for the “Spirit of the Games” award, the event’s highest honor.

The Hollywood version of this story would have Velasquez suddenly rising from his wheelchair to take a step for the first time in 24 years. But this is reality, and the man with the eloquent baritone voice who’s seldom at a loss for words could do little but thank the crowd, tears welling in his eyes.

Velasquez, 59, is back at it this weekend in Omaha, Neb., competing in the 28th VA National Wheelchair Games. Billed as the world’s largest annual wheelchair sports event, the games draws athletes from 45 states, Puerto Rico and Great Britain.

A shoulder injury will limit Velasquez to four events this time, and he’ll do all he can to again come away with multiple gold medals, but winning isn’t what these games are about for Velasquez and most of the competitors.

“These games are one of the things we love to do,” Velasquez said. “We try to get the newly injured veterans into these games as quickly as possible, because the rehabilitative power of this competition is the equivalent of being reborn.”

Velasquez, an Idaho native, was in the Navy during the Vietnam War era, spending most of his active duty in submarines in the Pacific before becoming a career Navy man. After returning home, he became a senior instructor at the nuclear reactor site in Arco, Idaho, an 80-mile commute from his home.

During one commute in early December 1983, Velasquez was a passenger when the driver hit an icy patch and lost control. Velasquez was thrown from the vehicle and into the snow, breaking his neck.

Velasquez was in shape — a swimmer carrying 169 pounds on his 6-foot frame — and doctors have said that strength perhaps allowed his spinal cord to remain intact through the trauma. The snow kept swelling to a minimum while causing him to almost succumb to Hypothermia.

“They told me he wouldn’t make it through the night,” Teresa Velasquez said. “Well, he did and they moved him to the hospital in Pocatello.”

It was there that Velasquez overheard the doctors talking about the grim prognosis.

In retrospect, Velasquez said, it wasn’t out of self-pity that he contemplated pulling his plug; it was the thought that he would be a burden to his family.

“I was going from being a senior chief petty officer with a lot of responsibilities to a hunk of meat with a machine breathing for me,” he said. “That was such a traumatic experience. Fear was the first thing, then you’re challenged by what the future holds for you.”

Velasquez spent 43 days in the Pocatello hospital, then was transferred to the Veterans Hospital in Palo Alto for extensive Rehabilitation. He was down to 122 pounds.

“Joe had some major limitations early in his recovery,” Teresa Velasquez said. “He felt like giving up. Our children were 3 and 6 when he broke his neck, and he had just lost his employment. He was completely paralyzed from head to toe, and if he could have moved enough to pull the trigger, he might have.”

The doctors told the family it would take 18 months to determine if Velasquez would ever be self-sufficient. Almost 18 months after the accident, he began to move his arms. Technically, he’s an incomplete quadriplegic, meaning all his limbs are affected by the injury to some degree.

“My legs are pretty much useless,” Velasquez said. “Well, they’re kinda cute, but other than that …”

There were several turning points in Velasquez’s recovery. The first was regaining the desire to live.

“The most important moment was when my family surrounded my bed and told me they were there for me,” Velasquez said. “I knew they meant it.”

He credits the staff in Palo Alto for keeping the therapy interesting as he relearned to do all those things he used to take for granted. He still could swim, but he had to learn to use a wheelchair for mobility.

Velasquez laughs often, but especially when someone speaks of a handicapped person as “wheelchair-bound.”

“You know, if I didn’t have this wheelchair, I’d look very bad dragging my butt across the floor,” he said. “If you can’t laugh at yourself, even in this situation, you’re going to be pretty miserable.”

He returned to Idaho following his release from the hospital, nearly two years after the accident, but quickly discovered that wheelchairs and harsh winters are incompatible.

The family began to research places to live. It had to be a warm-weather college town, preferably rural, with a strong church presence. They narrowed their choices to 24 cities, sent letters to each and whittled the 17 responses to a few finalists before embarking on a tour.

In 1986, the Velasquez family moved to Turlock to start anew.

Velasquez enrolled at Cal State Stanislaus, earned his liberal arts degree and a teaching credential, and began working as a specialized assistant at Schendel Elementary School in Delhi.

He also became increasingly self-sufficient, especially in terms of mobility. In addition to his wheelchair, Velasquez has a van outfitted with a wheelchair lift and hand controls, which he needs no help to operate.

But the athlete within still wasn’t being allowed out.

“Military men are very competitive by nature,” said Teresa Velasquez, who has a bachelor’s degree in physical education-health and was a teacher in Idaho. “When there’s nothing to compete for, they feel like giving up.”

He heard about the VA Games while rehabilitating in Palo Alto, and shortly after his move to Turlock decided to see what they were about.

“I know he felt like a dork in that first year, but by the second year he had a goal and a target, and I think he’s won medals in every year since that first one. The wheelchair games gives things back to these people that they thought they’d lost forever,” Teresa Velasquez said.

Velasquez’s commitment to the games goes beyond the competition. The VA Games have become a family affair, with his brothers and sisters attending the games nearly every year to volunteer. In addition, as a 20-year member and former commander of Turlock VFW Post 5059, Velasquez is active in recruiting new athletes and raising money for the VA Games and VFW state games.

“I ask for money every year from the VFW, and every year they overwhelm me with their support,” he said. “They deserve lots of accolades for their work.”

Velasquez admits to slowing down. He’s nursing a shoulder injury that will curtail his swimming this weekend, but nothing was going to keep him from his 21st trip to the VA Games.

The competition is fierce, but every competitor is a brother or sister. And in the end, those who didn’t finish first often are the biggest winners simply for having accepted the challenge.

“That’s what these games are all about,” Velasquez said. “I challenge you to find someone at these games feeling sorry for themselves, and all of us are wheelchair users.

“I know that 22 years ago, when I went to my first games, it left a positive impact on me that hasn’t left. It taught me that life does not end when you need a wheelchair to get around.”

Bee staff writer Brian VanderBeek can be reached at bvanderbeek@modbee.com or 578-2300.

See how thousands ran for those who can’t