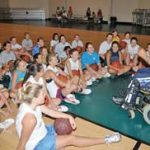 The sound of basketballs rhythmically hitting the gym floor filled the inside of Eastview Recreation Center.

In one corner, a man’s face familiar to basketball fans here in Greene County could be seen talking to a group of young ladies. They were gathered around him, all listening intently to what he had to say.

For more than twenty years, Coach Larry Ricker has been spending a portion of his summers teaching, encouraging, and instilling the game of basketball into young Greene County athletes. The exception was last year when the coach was continuing to recover from a tragic accident that nearly cost him his life.

Earlier this month, however, Coach Ricker was back on the basketball court holding camp, traveling quickly across the gym floor in a motorized wheelchair, and continuing to share his knowledge and love for a game that he cultivated through decades of coaching.

It has been two years now that one of the most successful coaches in Greene County girls basketball history suffered the spinal injury that forever changed his life. He lost a son – and he was left with a devastating, near-fatal injury.

For anyone in a similar position, it would have been easy – and understandable – to have just given
up. Yet, like in so many of the games that he had coached, Coach Ricker refused to quit.

In the early summer of 2006, Coach Ricker conducted his annual basketball camps – one for girls and
one for boys. By early August, he was looking ahead toward a new school year at Camp Creek Elementary School, where he was a teacher and coach.

Prior to his move a year earlier to Camp Creek, Coach Ricker had served for 22 years as a teacher and coach at South Greene High School. As head basketball coach of the Lady Rebels, he garnered an impressive four state championships, three additional title appearances and 648 victories.

He was also a successful football coach at South Greene and at Camp Creek – where he led the Bears to a county title in 2005.

On the weekend of Aug. 12, 2006, however, the coach was taking a rare step away from team sports, and turning his attention toward one of his other favorite pastimes – bass fishing.

He and his son, Neal, 22, had been fishing that evening at Cherokee Lake when a terrible tragedy suddenly occurred. Their 18-foot bass boat collided on the water with a cabin cruiser — killing Neal and nearly taking the life of Coach Ricker. Mike Riddle, a boater on the cabin cruiser, was also seriously injured in the accident.

At the University of Tennessee Medical Center in Knoxville, where Coach Ricker was airlifted from the lake, doctors delivered the news to him and his family. His spinal cord at the 4th and 5th Cervical Vertebrae in his neck was injured. The spinal cord wasn’t severed, but it was damaged. Coach Ricker was facing paralysis.

The National Institute of Neurological Disorders and Stroke explains that spinal cord injuries typically result from a blow that fractures or dislocates the vertebrae – the bone disks that make up the spine.

Most spinal injuries don’t sever the spinal cord. Instead, they cause damage when pieces of vertebrae tear into cord tissue or press down on the nerve parts that carry signals.

With an Incomplete Injury, such as the one that Coach Ricker experienced, there is some movement and sensation below the injury.

“Some have no movement whatsoever, and they have to be put on a Ventilator (in order to breathe.) Some are like me, and they have a little bit more success,” he said.

In the early days of his injury, Coach Ricker could not move his arms or his legs at all.

He spent two weeks hospitalized at UT Medical Center and was then transferred to a Rehabilitation center in Atlanta, Ga., which specializes in spinal cord injuries. It was at Shepherd Center that Coach Ricker began his long and difficult journey toward recovery.

After nine weeks in Atlanta, he was finally able to return home to Greene County, where he continued further rigorous therapy. He began traveling three days a week to Quillen Rehabilitation Center in Johnson City, and later to Greeneville Orthopaedic Clinic, where he worked with Physical Therapist Allen Nance, one of the coach’s former football players and athletic trainers at South Greene.

Slowly – very slowly – Coach Ricker began to regain some use of his arms and hands. It was a very encouraging sign.

“When I first went to Shepherd Center, I couldn’t even move my arms. Some people with this type of injury still can’t,” he explained.

Today, Coach Ricker continues to work hard on his rehabilitation, which he calls “unbearable” at times.

At home, he works out regularly with dumbell weights and Thera-bands, elastic resistance bands that aid with muscle conditioning.

“I’m just doing the things I can do. I’m still very limited, but anything beats nothing.”

The hardest part of his recovery has not been the physical part. It has been the emotional one.

Losing a child is a parent’s worst fear. And for Coach Ricker and his family, Neal’s death has been devastating.

“The hardest part of all of this has been the loss of our son,” he said. “There’s not a day that I handle it well … My wife and my son, Andy … we all struggle.”

In coping with his losses, Coach Ricker said he has turned to faith and put his trust in the Lord.
“God only knows why He left me here,” the coach said. “Perhaps He has more for me to do. I don’t know.”

Through this, the coach said he has learned to take things day-by-day.

“I have good days and bad days,” he said. “Different days I feel different emotions. Some days I could motivate someone to try harder, but other days I need motivating myself.”

The coach gives high praise to his wife, Billie June, for her love and support. “She’s my primary caregiver,” he said. “She has been amazing to help me overcome things.”

He also expressed deep appreciation to everyone who has reached out to him and his family during the past two years.

At the basketball camp, he said he was extremely appreciative to his brother, Chris Ricker, also a former coach, and several of his former South Greene basketball players who were volunteering their time and talents to help teach the young athletes.

“People have done many things for me, and I’m real appreciative of it – even though I may not seem to show it or say it. I still feel it,” he said.

Being involved with the basketball camp

this year has been a positive experience for him, he said.

“It helps getting out,” the coach continued. “It’s easy for someone to go through a tragedy like this and become withdrawn. I find myself doing that often.

“My brother, Chris, has been a Godsend, Coach Ricker continued. “He has been much more than any brother could hope for in this awful situation. My mother, Nadine, has also helped tremendously, and the rest of my family members and friends have been supportive as well.

“It’s good to be here (at the camp) and share this with my brother and some of my former players, and be a part of this camp. To see the excitement in the kids’ eyes – it makes me feel better.
“I feel like I still have a lot to give,” he said.

Throughout his recovery, Coach Ricker said he has found himself remembering his own words – ones he often preached to his players in order to motivate them.

“A lot of the things that I’ve said as a coach are coming back to haunt me now,” he said.

Perseverance. Determination. Pride. These were all qualities that Coach Ricker tried to instill in his players. Now, he has been reminding himself of those same attributes.

“One thing I’ve always done is try hard,” he said.

This strong belief carried him through his years of successful coaching, as well as through his long months of rehabilitation.

Now, he hopes that same belief has been successfully conveyed to the young female athletes who participated in his recent basketball camp.

“These kids are really working hard and trying to improve,” he said of the 70 young athletes who attended the camp.

“I think all of our dreams are for them to be able to compete on a high level. Maybe we even have a future state champion here,” he said.

Most importantly, however, the coach said perhaps some of the campers will one day receive needed
college scholarships money – not only through basketball success, but also through their achievements in the classroom.

Coach Ricker is proud that many of his student athletes were able to continue their education on the college level.

“I had some really good girls early in my high school career,” he said. “They were real hard workers and dedicated.

“Many people always thought it was only about winning with me,” Coach Ricker said. “But it wasn’t. It was about, first of all, being a good person, secondly, being a good student, and then being a good athlete.”

Christopher and Dana Reeve Foundation Awards Over One Million Dollars in...